What Does the US Troop Withdrawal Mean for Syria? 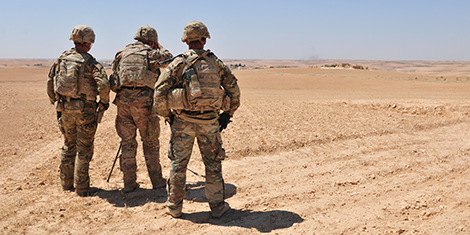 This article was originally published by the United States Institute of Peace (USIP) on 19 December 2018.

On Wednesday, the White House announced that it will “fully” and “rapidly” withdraw the U.S. military presence in Syria, where approximately 2,000 U.S. troops have been stationed in the northeastern, Kurdish-controlled part of the country, near its border with Turkey. USIP’s Mona Yacoubian examines the implications of the troop withdrawal and its broader impact on the Syria conflict.

What are the implications of the recently announced U.S. troop withdrawal from Syria?

A precipitous U.S. troop withdrawal will undermine critical U.S. interests in Syria. The U.S. troop presence serves as a key pre-condition for a newly invigorated U.S. Syria policy focused on the enduring defeat of ISIS, the withdrawal of Iran from Syria, and the rejuvenation of the Geneva Peace Process. These objectives will be compromised significantly by an immediate U.S. military withdrawal:

Compromising the counter-ISIS campaign. While the counter-ISIS military campaign is in its final stage, the enduring defeat of ISIS is far from assured at this point. In a recent report, the lead inspector general estimated that as many as 30,000 ISIS fighters remain in Syria. Equally concerning, indicators of an incipient ISIS insurgency have appeared with increasing frequency. At the same time, U.S. civilian assistance to stabilize areas liberated from ISIS could be curtailed without a U.S. military presence on the ground. This assistance—focused on rubble removal, the provision of essential services, and building local governance institutions—has been critical for helping civilians in ISIS-liberated areas get back on their feet. The lessons learned from the 2011 U.S. military withdrawal from Iraq underscore the need to set the conditions for ISIS’ last defeat by addressing underlying grievances and ensuring against the emergence of power vacuums.

Undermining a bulwark against Iran and Russia. While the primary focus of the U.S. military presence in Syria is the enduring defeat of ISIS, U.S. forces on the ground have also served as a key counterweight against Iran and Russia. In particular, this derivative benefit has countered further Iranian expansion into eastern Syria. Should the U.S. withdraw, Iran as well as Russia and the Assad regime will be well poised to exploit the vacuum that will be created.

What are the broader implications for the Syrian conflict?

Heightened Turkish-Kurdish hostilities. The U.S. withdrawal will leave a dangerous power vacuum on the ground that could lead to new conflicts erupting. Most urgently, Turkey has been threatening a military incursion in Syria against the Kurds. The Kurdish-led Syrian Democratic Forces have been a critical U.S. partner in the fight against ISIS, serving as the primary force on the ground responsible for liberating ISIS-held territories. To date, the U.S. presence on the ground in northeastern Syria has served as an important hedge against a large-scale Turkish attack. Yet, Ankara may decide to act following a U.S. pullout from Syria, provoking a larger “hot war” in Syria between Turkey and the Kurds.

Regime attempts to reassert control. The Assad regime has long stated its desire to regain control over the entirety of Syria. Having consolidated its hold over the western “spine” of Syria, Damascus will likely exploit an American military withdrawal to reassert itself in eastern Syria, an area rich in hydrocarbon and water resources, as well as fertile agricultural land. At a minimum, it will seize on the U.S. absence to negotiate its return to northeastern Syria, if not initiate hostilities against Kurdish forces to retake the area by force.

A Kurdish turn to Damascus? Earlier this year when President Trump announced his desire to withdraw U.S. troops, the Kurds responded by promptly initiating negotiations with Damascus. Renewed U.S. assurances to the Kurds as well as the wide divergence between the Assad regime’s goals and Kurdish aspirations led the talks to falter soon after they began. However, a precipitous U.S. withdrawal would have existential stakes for the Kurds—simultaneously threatened by Turkey, the Assad regime, Russia and Iran. The Kurds may decide they have no choice but to negotiate a deal with a regime, albeit on weaker terms than before. Even if the U.S. should once again pull back from the brink of withdrawal, the damage to U.S. credibility and its relationship with the Kurds will be done, prompting the Kurds to seek a longer-term understanding with Assad.

Mona Yacoubian is Senior Advisor for Syria, the Middle East and North Africa at the United States Institute of Peace.