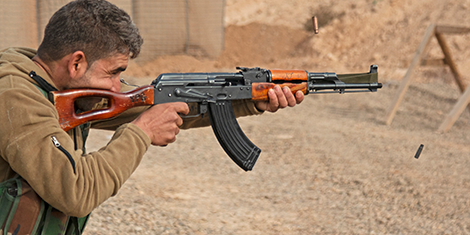 This article was originally published by the Danish Institute for International Studies (DIIS) on 20 March 2019.

The broad definition of the term ‘foreign fighter’ causes operational problems for risk assessments. It is therefore important for security officials to identify significant variations by classifying actors into major categories.

When assessing the risk of continued security threats from foreign fighters, it is crucial to distinguish strategically between foreign fighters who join local rebel groups and those who join globalist groups.

Ways should be provided for foreign fighters who have joined local rebel groups to ‘opt out’ and return home after the end of fighting in order to discourage them from becoming globalist foreign fighters and to stem potential flows of foreign fighters to new theatres of conflict.

The unprecedented size and constellation of the wave of foreign fighters travelling to Syria and Iraq has made it difficult for security officials and lawmakers to determine which actors should be covered by the term. Because this phenomenon is continually evolving, the term has been used to describe ever more varied trends, such as the inclusion of female IS members.

This definition adds to David Malet’s widely used definition of foreign fighters as ‘non-citizens of conflict states who join insurgencies during civil conflicts’, as well as Thomas Hegghammer’s description of a foreign fighter as an unpaid agent who has joined a non-state armed group in an insurgency with which he does not have citizenship or any ties of kinship.

Because of the operational problems caused by the wide variation in the use of the term, it is important to identify significant variations by classifying actors into major categories. This overview of relevant categories has been developed with an emphasis on whether the foreign fighters’ engagement in conflict is local or globalist, rather than on their affiliation or lack of affiliation with terrorism.

Based on an in-depth study of how the foreign fighter phenomenon has evolved in the Middle East in recent years, an overview is provided of the significant characteristics of different foreign fighter categories. This overview places the emphasis on whether the relationship between the individual fighter ant the conflict he is engaged in is local or global, as this indicates whether he is likely to join other theatres of conflict and how likely he is to pose a threat to the country to which he moves when returning from the conflict.

All six categories exclude soldiers serving in national armies, mercenaries fighting for private companies, unarmed IS members, and members or organised transnational criminal networks with no relationship to any political conflict.

An actor who travels abroad to fight for an insurgent movement with a geographically limited range of conflict with which he does not have a familial, ethnic or other close personal relationship. A recent example is the non-Syrians who joined Ahrar al-Sham to topple President Bashar al-Assad. A local foreign fighter is assumed to have ideological, religious or idealistic motives for joining a particular conflict, as his engagement cannot be explained by personal affiliation or material gains.

An actor who travels abroad to fight for an insurgent movement operating in a geographically limited conflict with which he has a familial, ethnic or other close personal relationship that provides him with a direct interest in the outcome of the conflict. Examples of such activism are the diaspora Iraqi Shiite fighters who joined the various Shiite militias or the diaspora Kurds who joined Kurdish fighting units.

An actor who travels abroad to fight for an insurgent movement operating in a geographically limited conflict from a neighbouring state in order to advance national goals of political significance. An example is the Iranian-backed proxy Shiite rebel groups active in Syria and Iraq, such as Hezbollah.

With the rise of IS, a foreign fighter has also come to mean an actor who travels abroad to fight in order to defend or expand the territory claimed by IS as a province within its global caliphate. Uniquely, any fighter who joins the caliphate immediately becomes its citizen and therefore no longer considers himself ‘foreign’ to the territory in which he is fighting. Furthermore, emigrating to the caliphate is considered a permanent choice.

Those who were previously termed ‘international terrorists’ are increasingly included in the ‘foreign fighter’ category. An international terrorist fighter is an actor who travels abroad to train with or fight for a global terrorist movement that is not involved in a geographically limited or ethnic conflict. The primary example of this category is members of al-Qaeda.

An actor who continues to travel inter-regionally between theatres of conflict to fight alongside insurgent movements operating in geographically limited conflicts with which he does not have a familial, ethnic or other close personal relationship, but without affiliating himself solidly with any particular movement. This category may include both experienced veteran fighters and young ‘adventurers’ who join conflicts in which they have neither ideological material nor financial interests.

Most importantly, foreign fighters who join armed groups with global aims will have notably different risk profiles from those who join rebel groups with local aims. Foreign terrorist fighters with globalist aims are more likely to find other theatres of war relevant or to include attacks on the West in their strategy. Furthermore, their ability to ‘opt out’ is complicated by their potential criminalisation.

In contrast, diaspora actors are less likely to continue to other theatres of conflict with which they have no direct links, while regional fighters are more likely to limit any further travel to other neighbouring countries involved in the same regional competition for influence. Local foreign fighters are more likely either to settle and stay long term in the area they travelled to after fighting has ended, or to return non-violently to the country from which they travelled.

However, as has been noted, if it is made complicated for local foreign fighters to return after fighting has ended, they may develop a more global focus and continue to travel between different theatres of conflict. The categories presented are therefore dynamic in nature, as actors may move between them in response to the obstacles and opportunities they are confronted with. The home states of foreign fighters should therefore contribute to halting global jihadist conflicts by developing avenues for their citizens to return home and national strategies for the rehabilitation of former foreign fighters.

Maja Touzari Greenwood is a Researcher in international security at the Danish Institute for International Studies (DIIS).