In the Fight Against Violent Extremism, Why Is Prevention Elusive? 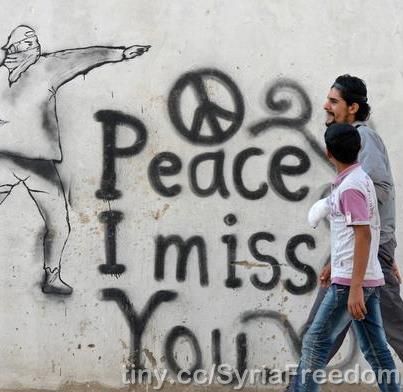 Graffiti in Syria, ‘Peace I Miss You’

This article was originally published by IPI Global Observatory on 11 January 2016.

Countering violent extremism has become a cottage industry in both the global North and South, as Daesh (also known as ISIS) and other transnational armed terrorist groups continue to threaten the very foundations on which national and international peace and stability have rested for decades. For the countries of the Sahel-Sahara and North Africa regions, brutally affected by the scourge of violence, countering violent extremism (CVE) has been embraced as the new overarching framework for a continued pursuit of the “war on terror.”

Under the CVE umbrella, these countries have multiplied initiatives and adopted various measures both at the national and regional levels to address the roots of radicalization, violent extremism, and terrorism. Efforts based on increasing education and cultural outreach—such as training imams to counter radical Islamic teachings—have become common. Some countries, with the active participation of civil society organizations, have devised national action plans that include the organization of inter-religious and inter-communal dialogue, as well as awareness-raising campaigns aimed at encouraging citizen engagement in the prevention and the fight against violent extremism. Still others have included in their national CVE strategy the creation of socioeconomic opportunities for youth and other marginalized groups to prevent their radicalization.

Meanwhile, more traditional law and order-based counterterrorism approaches have also taken on more of a focus on prevention, rather than merely responding to the after-effects of attacks. This includes adopting legislative and policing frameworks to control, repress, and track terrorist activities; training, equipping and reorganizing national security forces and intelligence services; and enhancing border surveillance and check points. Some of these countries, because of porous borders and the transnational nature of the terrorist threat, have relied heavily on existing regional and international security cooperation arrangements or created new ones, such as the G-5 Sahel countries, which brings together Niger, Mali, Chad, Mauritania, and Burkina Faso.

With the exception of one or two countries, efforts continue to be largely state-centric and security-driven and do not go far enough in recognizing and addressing the governance and economic deficits that are at the root of radicalization and violent extremism.

As Daesh tightens its grip on the resource-rich northeastern part of Libya and consolidates its alliance with organized crime groups, the security-driven counterterrorism approaches to violent extremism are becoming more prominent, resulting in a rush to adopt repressive, punitive laws that end up sacrificing fundamental human rights and freedoms on the altar of stability. This in turn spawns frustration and radicalization. This has already happened in Tunisia after three deadly terrorist attacks of the past year. As of July 2015, a new counterterrorism law is on the books, some provisions of which have been judged as inconsistent with international human rights standards, and counter to the spirit and letter of the new Tunisian constitution.

The atmosphere of fear created by terrorist acts seems to be giving sustenance to a long-cultivated myth that people must forego some of their rights in order to live safely. In fact, there is no contradiction between security and human rights. They go hand-in-hand. Yet according to a recent poll in Tunisia, 78% of Tunisians indicated that they were ready to sacrifice a little bit of liberty for more security. As a result, we are seeing greater militarization of public security and diminished equality before the law.

Despite the increasing public acknowledgment of the limitations of military responses and the recognition that responding to violence with more violence makes us all more insecure, there continues to be deliberate reluctance to dig deeper in diagnosing some of the powerful drivers of violent extremists. This apparent paradox conjures up what Jacques Benigne Bossuet, a 17th century theologian, said: “God laughs at men who complain of the consequences while cherishing the causes.”

During a forum held in Tunis on December 7-8th 2015, which brought together a number of Francophone policy analysts, researchers, and civil society practitioners from the Sahel and North Africa regions, practical suggestions were put forward in order to give a more prominent place to prevention in the fight against violent extremism in these regions. It was forcefully argued that when a preventive lens is applied, the minds of policymakers are freed from the tyranny of the urgent and focus instead on long-term strategies that address not only the proximate causes of insecurity, but also the underlying political, security, economic, social and cultural factors that drive and sustain it. Among these factors, the following were cited: weak or mistrusted states and elites, corruption and social injustice, lack of employment opportunities for youth, exclusionary policies that marginalize minorities, the shrinking of safe spaces for meaningful public policy debates, the lack of intercultural and interreligious dialogue, the criminalization of legitimate political dissent, and a broken educational system. All of these are hallmarks of poor governance and incubators of societal conflicts.

Regional and geopolitical considerations were also discussed in the Tunis forum as contributing or inhibiting factors in the fight against violent extremism. But they were not treated with the required candor, even though some of them are the “elephants in the room,” accounting in large measure for the reluctance of some governments to forego military solutions and pursue less violent measures.

Why is Prevention Elusive?

There are a number of reasons why prevention, despite the rhetoric and policy prescriptions, remains elusive. One reason is that if one digs deeply, it might bring to light the real identity of the states and/or powerful elites who finance many of the radical movements or control the poisonous religious media outlets they utilize for propaganda.

A second reason is that an analysis of root causes is likely to dredge up the strategic failures of wars and post-war efforts in Iraq and Libya, which unwittingly allowed Daesh and other barbaric malignancies to emerge, in the wake of massive humiliation and subjugation of large segments of society during and after these military adventures. In his book “

A third reason lies in the “securitization” of policy on Africa and other instability-prone areas by influential external actors in the context of the war on terrorism. A number of states were declared either weak, fragile, or failing and therefore in need of quick institutional capacity fixes, including military training, to make them functional, resilient to terror threats, or able to contain their spread to distant shores. African leaders with waning or contested legitimacy at home have aided the process of securitization by cunningly presenting themselves as vanguards in the fight against terror. They have used fear tactics to justify the acquisition of military hardware for their security forces for the purposes of ensuring state and regime security, rather than human security.

Preventing violent extremism will remain an elusive goal unless these and other uncomfortable geopolitical “knowns” are acknowledged in our analysis and factored into the search for sustainable solutions.

The current approach of clenched fists in the face of terror feeds on our fears and will not bring stability. The discourse on state fragility has led national and international policymakers to focus primarily on the lack of capacity of formal state institutions, as if they were the only actors that can confront violent extremism. This policy discourse has neglected the informal structures that contribute to peace, stability, and development in society. As acknowledged in the Secretary-General’s new report, engaging citizens— including families, women, and youth—in public conversations on the drivers of, and solutions to, radicalism and violent extremism will go a long way toward addressing them. It is an overarching policy of inclusive, outstretched hands—not clenched fists—that is likely to make the tentative gains in this monumental fight less reversible, and lay the foundations for sustainable human security.

Youssef Mahmoud is a Senior Adviser IPI supporting the Africa, Middle East, and peace operations programs and serves as focal point on mediation policies and practices.