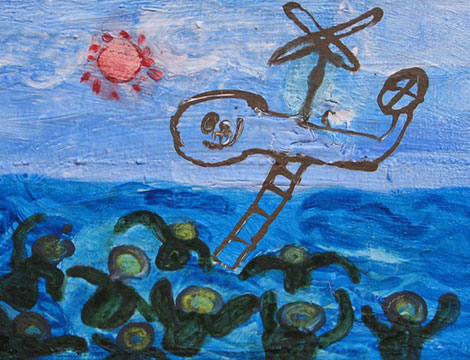 This article was originally published by the Stockholm International Peace Research Institute (SIPRI) on 18 December 2016.

Migration has persisted in one form or another throughout the centuries: from nomadic hunters to industrial labourers, from traders to seafarers, from colonists to persecuted minorities. Many migration routes—like those that traverse the Sahara or meander through the Amazonian border regions of Brazil, Ecuador and Peru—pre-date the states whose borders they cross. And yet, the study of vulnerable human mobility and our commitment to the protection of migrants and their rights are relatively recent.

Comprised of numerous and often competing narratives, public discourse on migration is indicative of its complexity. However, often framed at the state or regional level, it also obscures the human dimensions of migration. On International Migrants Day, it’s worth reflecting on the number and experiences of people on the move.

In 2015, two thirds of the world’s international migrants were hosted by just 20 countries, 16 of which were located in either Asia or Europe. Among migrant-sending states, Asian countries dominated and India was the largest individual migrant-sending state. The proportion of international migrants originating from Asian countries reached 43 per cent last year and has been growing for some time. Although the USA remained the largest migrant-hosting state and Europe (barely) the largest migrant-hosting region, the rise of Asian countries as both top destinations and top senders illustrates the growing importance of South-South migration.

It’s difficult to attribute the above-mentioned regional trends to any single factor since the overall figures represent both voluntary and forced migrants. However, examining the origins and destinations of forced migrants tells us part of the story. Sub-Saharan Africa was the largest refugee-hosting region, accounting for five of the top 10 asylum countries and narrowly surpassing Europe in terms of total refugees received. Of the top 10 refugee-sending countries, six were also located in Africa. In 2015, African states were affected by a wide range of violence and conflict, including Islamic extremist violence in Nigeria, Tunisia and Libya, civil war in South Sudan, anti-government armed resistance in Burundi, and political and xenophobic violence in South Africa, to name a few.

At the individual state level, Turkey surpassed all other asylum countries, hosting 2.54 million refugees in 2015. Together with Pakistan, Lebanon and Iran, the next most significant asylum countries, Turkey illustrates the consequences of conflict-driven migration on the neighbourhood: Most refugees in each of these asylum countries fled from bordering states (Syria and Iraq in the case of Turkey, Lebanon and Jordan; Afghanistan in the case of Pakistan).  In fact, Syria independently produced 23 per cent of the world’s total refugees last year. Collectively, Syria, Afghanistan and Somalia supplied 54 per cent.

Vulnerability, urban migration and the plight of pluralism

At 244 million, the absolute number of international migrants in 2015 was greater than ever before. While the rate of international migration as a function of global population increase has remained steady at about 3 per cent for several decades, the proportion of forced migrants has exploded. Over the last 19 years, the population of forcibly displaced persons has seen a 75 per cent increase. Last year alone, there were 65.3 million forcibly displaced migrants around the world, including 21.3 million refugees and 40.8 people internally displaced by conflict and violence. 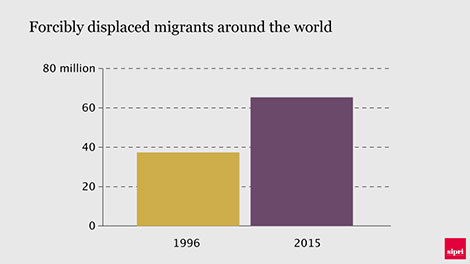 The number of forcibly displaced migrants around the world has increased from 37.3 million in 1996 to 65.3 million in 2015. Data: UNHCR (Global trends: Forced displacement in 2015). Graphic: SIPRI

International migrants are tremendously diverse. Forced migrants tend to be the most vulnerable because the circumstances of their departure limit the information and resources (i.e. papers and credentials, currency, knowledge of safe routes, clothing) available to them. However, the spectrum of individuals affected by vulnerable human mobility is much broader. Many voluntary migrants from developing and conflict-affected contexts are confronted with risks similar to (or equally threatening as) those faced by forced migrants. In transit, exposure to crowded and unsafe conditions increase migrants’ susceptibility to crime, malnourishment and disease. Female migrants are particularly vulnerable to sexual and gender-based violence as a result of inadequate accommodation.

Once at their destinations, international migrants may be subjected to stigmatization, marginalization and, in certain contexts, even hate-motivated violence. Because access to the labour market depends heavily on language acquisition and the ability to tap into social and professional networks, migrants often have higher rates of unemployment. Among irregular migrants (those who are without papers, have overstayed their visa or have otherwise moved in violation of regulatory norms), income-generating opportunities are usually restricted to informal and illegal work, which increases the risk of exploitation.

In 2015, more than half of the world’s international migrants lived in urban centres. Because of their concentration in cities, today’s migrants—and their physical, linguistic and cultural differences from host communities—are much more visible than their predecessors. Native majority groups, perceiving their reduced number and influence, sometimes feel threatened by newcomers. Recently, far-right parties have been able to manipulate public sentiment against migrants in countries where the national identity is constructed in terms of (the majority) ethnicity and religion, and in those where staunch liberal secularism defines the political culture.

Today, even the world’s most advanced democracies are struggling to effectively manage diversity. The rise of far-right parties and candidates in the USA and Europe is a case in point and the corresponding increase in nationalist and xenophobic rhetoric indicates a growing malaise with both multiculturalism and multilateralism. Since migrant acculturation strategies are influenced by the attitudes and policies of the host community, discrimination and intolerance can negatively impact their desire to integrate, further deteriorating intercultural relations.

Keeping migrants and migration in perspective

All too often, migrants are described as inherently ‘good’ or ‘bad’. Instead, we need to better understand the unique vulnerabilities of different migrant groups and how those interact with conflict and development systems at various levels and in different contexts. On one hand, this means investigating the conditions that motivate (or force) people to move—such as poor governance, inequality, violent conflict, unemployment or the expectation of a better life elsewhere. On the other hand, it means studying the ways that human mobility impacts the prosperity and security of migrants, host communities and states.

While the direction and composition of migrant flows change over time, it’s important to remember that there is nothing new or unnatural about human mobility. Migration is a consequence of many interrelated economic, environmental, political and social processes. As our knowledge of their inter-linkages increases, so too will our ability to prevent and respond to migration-related shocks while ensuring the rights and security of people on the move.

Kate Sullivan is the Programme Coordinator of SIPRI’s Security and Development Programme.