“When you try to terrorize people and you burn their houses, when you desecrate graves and when you make death threats, to me that is way beyond activism and I would call this clearly terrorism,” Daniel Vasella, CEO of the Swiss pharmaceutical company Novartis, told the media.

Some days before, the “Militant Forces against Huntingdon Life Science (MFAH)” burned down his hunting cottage in Austria and desecrated his mother’s grave in Chur, Switzerland. The MFAH is said to be linked to the British campaign “Stop Huntingdon Animal Cruelty” (SHAC); Huntingdon being Europe’s largest and, seemingly, most controversial contract animal-testing company. Cynically, Huntingdon’s slogan could also be the MFAH’s credo: “Working for a Better Future.” 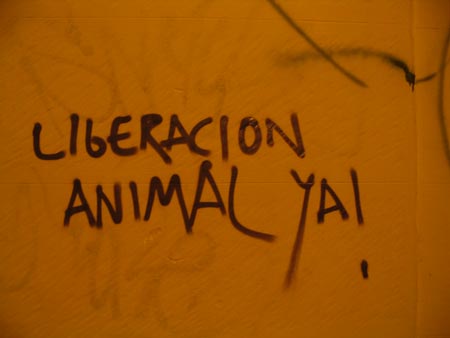 Incredibly enough, according to the Swiss domestic intelligence service, Dienst für Analyse und Prävention (DAP), investigations related to militant animal rights groups amount to as much as 10 percent of their daily workload.

Much has been written on animal rights and ethics. Classical Liberalism, for example, contributed profound ideas to the debate. Until today, a lively academic discussion is concerned with finding out what separates the human from the animal. Is it the hair? The ability to enter into contracts? Is there something like a ‘human exceptionalism’ which goes hand-in-hand with man being capable of morals? And if so, isn’t it our morality that obtrudes a ‘responsibility to protect animals’ on us? But what if the exploitation of animals is, to a reasonable extent, essential to mankind, be it for medical research, food or as livestock?

I can already hear the MFAH angrily shout that there cannot be any “reasonable extent” here. And this is where they stop being reasonable themselves and their crude arguments lose scale. All too often have I read the outrageous belittlement “animal Holocaust” while, cynically again, it was the Nazis to approve the most comprehensive set of animal protection laws in Europe, at the same time not being that reluctant in slaughtering millions of humans.

The challenge thus seems to be to protect animals without becoming animals.

Sure thing, looking into a suffering puppy’s eyes in a lab is heartbreaking (have you ever pitied the creepy crawlies you’re killing on your way to work, too?). And so is seeing reason and humanity deteriorating. It is, at best, paradox to be ‘humane’ to an animal without being humane to man first. And if we can’t get along with our likes, how do you think we’ll ever come along with our unlikes? What I love about animals is that they never succeed in being humans. They don’t even want to. What I hate about humans is that they frequently succeed in being animals. And want to.

Resorting to violence in order to promote animal freedom is both featherbrained and self-righteous. No creature on earth is giving life to itself. And everything that lives is equipped with dignity. There is nothing you can do about it so far, believe it or not. But if you actively decide to take or at least risk life, of man or an animal, better have very good reasons, for men even more so than for animals. And never ever claim that an animal life outweighs a human life. It doesn’t.

Pascal Couchepin, member of the Swiss Federal Council, commented: “This incident is an attack against the foundations of civilization.”

One Response to “Homo Homini Lupus”