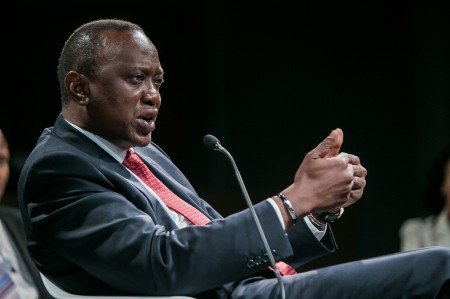 Uhuru Kenyatta, the President of Kenya

This article was originally published by the Institute for Security Studies (ISS Africa) on 4 February 2016.

As the 26th ordinary summit of the African Union (AU) ended in Addis Ababa on Sunday, Kenyan media led with reports that ‘the African Union has adopted, without amendments, a proposal by President Uhuru Kenyatta to develop a roadmap for withdrawal from the Rome Statute’ – as the Daily Nation put it.

What had actually unfolded was a little more nuanced. The AU heads of state did not decide to withdraw from the International Criminal Court (ICC) en masse – yet. Nor even did Kenyatta ask for that. In his speech to the AU Assembly, he asked the summit to give the Open-Ended Committee of African Ministers on the ICC ‘a new mandate to develop a roadmap for withdrawal from the Rome Statute as necessary.’

The key phrase here is ‘as necessary.’ The rest of his speech makes clear that withdrawal from the ICC would be conditional on the court failing to meet the AU’s demands. As Kenyatta said earlier in his speech: ‘It is my sincere hope that our ICC reform agenda will succeed so that we can return to the instrument we signed up for. If it does not, I believe its utility for this continent at this moment of global turmoil will be extremely limited. In that eventuality, we will be failing in our duty if we continue to shore up a dysfunction(-al) instrument.’

Kenyatta demands several ‘reforms’ from the ICC. This includes withdrawing its cases against his deputy, William Ruto, and Kenyan radio journalist Joshua arap Sang, who – like Kenyatta – were indicted for complicity in the political violence which followed the December 2007 elections. The case against Kenyatta was eventually dropped for a lack of evidence – mainly, most observers believe, because witnesses mysteriously disappeared, or evidence was destroyed or withheld by state agencies.

Kenya also demands that the ICC should not apply the rule allowing the use of prior recorded testimony in the Ruto and Sang case. The amended Rule 68 came about in 2013 because witnesses in the Kenyan cases were dying, disappearing or recanting their testimony; presumably because of bribes or intimidation.

Applying this rule meant the court could admit prior recorded testimony of a witness who has since died, is presumed to be dead, or is unavailable to testify orally ‘due to obstacles that cannot be overcome with reasonable diligence.’ The amended rule also permits the use of prior recorded testimony if there was interference with the witness, such as bribery or intimidation.

In the Ruto and Sang case, the court has used the amended Rule 68 to accept into evidence the prior testimony of five witnesses. Four had appeared in court, but recanted testimony on the stand, because they had been interfered with, the judges agreed. The fifth witness had disappeared.

Kenya has insisted that the amended Rule 68 cannot be applied retroactively to the Ruto and Sang case, because the rule was amended after the case began. Its appeal against the application of the rule is still before the court.

Most of all, though, Kenyatta wants amendments to Article 27 of the Rome Statute to give immunity to sitting heads of state. And that is undoubtedly the reform that the other heads of state most enthusiastically support.

AU Commission Chairperson Nkosazana Dlamini Zuma explained to journalists after the summit that the committee of ministers was looking at strategies ‘either to change the ICC to something fair and [which] everybody can relate to. Or if they fail, see what to do.’

Did that mean reform the ICC or leave it? – she was asked.

‘Obviously countries have joined the ICC, so it’s not an easy decision they want to take. But if the ICC behaves in a way where countries have to choose between the AU and the ICC, then it’s going to be difficult.’

It is hard to imagine the ICC agreeing to the reform that the AU wants most – immunity for sitting heads of state. And so it looks likely that the AU heads will in fact agree on withdrawal. But how that would work, is not clear. As Vincent Nmiehelle, the AU’s legal counsellor said when he was asked during the summit if the AU intended to withdraw from the ICC, ‘the AU is not a member of the ICC. Its member states are.’

Yet Dlamini Zuma’s remark – that if the AU failed to reform the ICC to its liking, member states might have to choose between the AU and the ICC – suggests the AU might put some pressure on them to leave the ICC.

Zuma’s threat – which was preceded by similar rumblings in the ruling African National Congress last year – was obviously provoked by the debacle at the AU summit in Johannesburg in June last year, when the South African government disobeyed High Court orders, first to detain Sudanese President Omar al-Bashir (a fugitive from ICC justice) in South Africa pending further legal deliberations, and then to arrest him.

The South African government was embarrassed by a High Court ruling that it had not only broken its own law – which domesticates the Rome Statute – but had also violated the country’s constitution. The Supreme Court of Appeal will decide next week whether or not to grant the government leave to appeal against the High Court ruling. Since South Africa has been one of the great champions of the ICC, its withdrawal, one might think, would be a serious blow to the court, adding considerable impetus to Kenya’s initiative for a mass withdrawal.

Anton du Plessis, Executive Director of the Institute for Security Studies (ISS) in Pretoria, disagrees. ‘South Africa might find itself in sparse company if it withdraws. Thus far, only Tanzania and Namibia have made strong statements to this effect in the past. Kenya might also stay in, especially if the case against Ruto collapses. So South Africa should think carefully before trying to prove a point and blazing a trail that few will follow.’

Ottilia Anna Maunganidze, a senior researcher and international criminal law expert at the ISS, agrees – noting that Kenya has threatened to pull out of the ICC before, most recently in September 2013, but has still not done so. ‘If Kenya withdraws, it would only do so if a few others have already done so. They don’t want to do this on their own.’ She adds that the decision to withdraw (or stay) is up to individual states, noting, ‘Once the dust has settled, countries decide for themselves whether they will withdraw or not. Whatever they decide would have to be according to their laws and bearing in mind national interest.’

It would be a terrible irony if South Africa did leave the ICC – in part to impress its fellow Africans with its pan-African credentials – and then found itself alone or nearly so. It would then have lost much of its international lustre as a defender of the rule of law, with very little to show for it.

But if that would be bad for South Africa, du Plessis believes it would not be a mortal blow for the ICC. ‘It might not be too bad for the ICC if a couple of rotten apple states withdraw. They are spoilers with access to the party. Best would be to get them out altogether so that the court can get on with its important work, within Africa, and hopefully also beyond.’

‘Beyond’ is the issue. The AU’s complaint that the ICC is biased against Africa partly falters before the facts. Six of its situations were referred to it by African governments themselves; two by the United Nations Security Council, without opposition from the African governments on the council at the time. The Kenya case was referred by the ICC Prosecutor, at the request of the Kenyan Parliament – with Kenyatta and Ruto as MPs concurring – because Parliament felt that adjudicating the post-election violence would be too hot a case for Kenya’s own courts to handle. And the Côte d’Ivoire case was also referred by the ICC Prosecutor – at the invitation of the country’s government, which was not a member of the ICC at the time.

Undoubtedly, though, the ICC should be bringing its justice to the rest of the world. It has begun to move in that direction, launching its first investigation beyond the continent, in the Republic of Georgia. Palestine might follow.

But, even within Africa, it should be avoiding the impression of bias by hastening its investigations of the Alassane Ouattara side of the post-2010 election conflict in Côte d’Ivoire to balance its prosecutions of Ouattara’s arch-enemy former President Laurent Gbagbo. His trial started last week, alongside the youth leader of his political movement Charles Blé Goudé. Only they, and Gbagbo’s wife Simone, have been indicted by the ICC.

Interestingly, though perhaps not surprisingly, the obvious bias in this case made no fuss at the AU summit, which was happening at the same time. Gbagbo is just a former head of state, after all, while Ouattara is firmly in the saddle – and therefore, in the AU’s view, beyond the reach of the law.

Much has changed in the AU since the bad old days of the Organization of African Unity. But one thing has not; the club still protects its members.

Peter Fabricius is Consultant at the Institute for Security Studies (ISS).