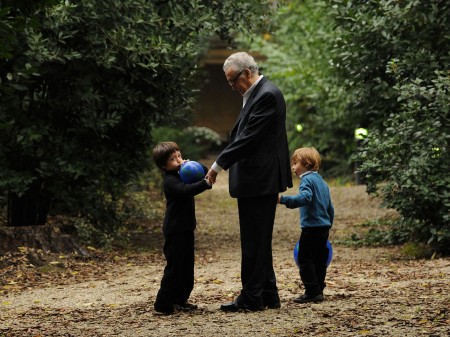 This article was originally published by IPI Global Observatory on 16 May 2014.

Lakhdar Brahimi, the Joint Special Envoy of the United Nations and League of Arab States for Syria, finally submitted his resignation, effective at the end of May. Brahimi was appointed by UN Secretary-General (SG) Ban Ki-moon in September 2012 to succeed the first special envoy, the former UNSG Kofi Annan.

While this was hardly unexpected, it carries significant symbolic meaning and offers insight into the emerging balance of power in the region.

Brahimi’s resignation confirms the current futility of negotiations contextualized by insufficient international political will to force a viable political solution and end the carnage in Syria. In an interview with the UN last August, Brahimi made it clear that the problem “was, and still is, how to bring the Syrian sides, and those who supported and support them, to accept the very principle of a political solution.” Brahimi, as he has done so often in his stellar international diplomatic career, embodied this very principle, one that he believes rests on a fundamental premise: “there is no military solution to this devastating conflict.” Indeed, his star peaked when the US backed down from precisely such a military response in Syria, creating disarray in the ranks of its hawkish allies: France, Saudi Arabia, Qatar, and Turkey, all of whom had supported some version of a military intervention.

Crucially, Brahimi was convinced that the “basis for such a [political] solution does exist” in the form of the June 2012 Geneva Communiqué agreed to by the Action Group for Syria. This document calls for a permanent cessation of violence and “Syria-led transition” that both recognizes Syria’s sovereignty and territorial integrity while calling for the establishment of a “transitional governing body” (comprising members of the regime and opposition groups) with “full executive powers.” Brahimi championed the convening of the January 2014 Geneva II international conference (initially scheduled for May 2013) to implement the main Geneva communiqué recommendations, and saw this conference as a last chance to save Syria from the abyss.

Brahimi’s resignation signals the failure of the Geneva process, at least for now. This failure—and Brahimi’s deep sense of frustration—has been largely blamed on the regime’s intransigence and decision by President Bashar al-Assad to run for a third term, and the opposition’s inability to unify politically or even militarily in any meaningful way.

However, the more logical explanation is that this failure reflects a shift in geopolitics in favor of the Syrian regime, a shift Brahimi surely understood and thus influenced his decision to abandon his mediation attempts. Taken within a broader context, in fact, we can observe that this shift has been building not just over the past year, but over the past decade, and in particular since the disastrous 2003 US-UK invasion and destruction of Iraq that paradoxically empowered Iran and resulted in a profound sense of insecurity in the Gulf Arab states, especially in Saudi Arabia. In simple terms, as the US has retreated with its decreasing standing in the region, the (now Russian-backed) Iran axis, that includes Hezbollah in Lebanon, has been “winning” geopolitically.

In this sense, the three-year struggle over Syria has represented, in regional terms, not so much the legitimate and noble aspirations of the Syria people to live in a more democratic society (which is how the uprising began), but rather the attempt by a Gulf-led coalition to arrest the increasing, and apparently inexorable, Iranian influence at any cost. The currency of this regional battle has been sectarian mobilization, while the cost has been horrific violence and suffering, as well as the total rupture of Syrian society.

The Syrian regime—steadfastly supported by Iran and Hezbollah, with coordinated international protection by Russia—has become emboldened by the US retreat and policy incoherence regarding Syria amidst growing concern about blowback from Gulf-sponsored foreign jihadi groups, and has adroitly capitalized on diverging interests between the US and Saudi Arabia. The spectacle of Saudi-Qatari competition for primacy in Syria has further undermined the opposition’s standing and ability to present a united front, and contributed to the failure of the “moderate” (Sunni) opposition groups (whatever these may be) to nullify the (Sunni) “extremist” elements (whatever these may be). In short, the regime has taken advantage of this confusion to make slow, but significant gains on the ground, most recently in Hama.

The failure of the UN Security Council—in particular, the veto-wielding club—to meaningfully support Brahimi’s vision for a political settlement (with its unsentimental objective of forcing compromises on both sides), as well as its dismal failure to address much of the humanitarian and refugee crises stemming from the war, is in stark contrast to its decisive move to compel Syria, under Chapter VII of the UN Charter, to destroy its declared chemical weapons stockpiles. The Organisation for the Prohibition of Chemical Weapons has worked steadily and without controversy under UNSC resolution 2118 to dispose of the vast bulk of these stockpiles within a relatively fast timetable, largely with the cooperation of the Syrian regime.

Clearly, if the Security Council had the same willingness to reach a political settlement as it did to rid Syria of chemical weapons, Brahimi would not have resigned. As Kofi Annan said when he stepped down as special envoy in August 2012: “When the Syrian people desperately need action, there continues to be finger-pointing and name-calling in the Security Council…” Brahimi lamented “how much more death, how much more destruction will occur” before the international community solves this crisis, even as SG Ban Ki-moon confessed that his envoy’s resignation was a “tragedy for the Syrian people” and a “failure” for the United Nations.

Meanwhile, in geopolitical terms, the US continues to pressure not Iran, with which it continues negotiations on the Iranian nuclear issue, but rather Saudi Arabia to fight against jihadi groups it helped set up. Saudi Arabia has meanwhile replaced its hawkish national security advisor Bandar bin Sultan, and has invited Iran to visit Riyadh. There is thus hope yet that a regional political settlement can be reached that recognizes Iran’s de facto standing in the region. But it will come too late for the Syrian people and its society.

Until then, Brahimi’s resignation means that the UN’s political role—and likely its humanitarian one—will be put on the back burner. It’s not clear who will replace Brahimi at the end of May, but whoever it is, they will not have the same standing and high-profile status he alone can command. Whether this is a good thing or not remains to be seen.

Karim Makdisi is Associate Professor of International Politics at the American University of Beirut.

For more information on issues and events that shape our world please visit the ISN’s Dossiers and the ISN Blog.