UN Peacekeeping, and a Pub Quiz? 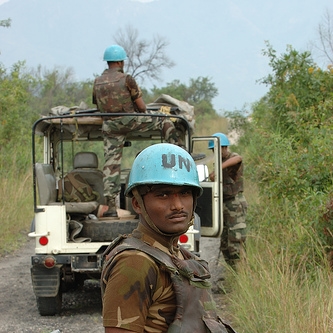 I often play Pub Quiz on my iPhone as I’m waiting for the bus. Recently, I was
intrigued by one question in particular – or more specifically, by the answer:

In which country – apart from India and Bangladesh – is Bengali an official language?

The correct answer is: Sierra Leone. Did you get this right?  The explanation is simple but beautiful: Sierra Leone named Bengali as an official national language in December 2002 to honor the Bangladeshi peacekeepers who were part of the United Nations Mission in Sierra Leone (UNAMSIL). Together with Pakistan and Nigeria, Bangladesh contributed the highest number of troops to this mission, mandated to implement the Lomé Peace Agreement and so end a ten-year civil war in the country. UNAMSIL was further tasked with assisting in the implementation of the Disarmament, Demobilization and Reintegration plan.

But Sierra Leone is just one of many missions to which Bangladesh has offered its services. As of July 2011, Bangladesh is the biggest contributor of troops, police and military personnel  to UN peacekeeping missions (with more than 10,000 at the end of July), followed by Pakistan, India, Nigeria and Egypt. To put this in perspective: The US currently contributes 100 UN peacekeepers and the UK 277.

The human cost of Bangladesh’s commitment UN peacekeeping is high: so far 106 troops have been killed, 25 of them in Sierra Leone alone.   So what’s in it for Bangladesh? A number of explanations have been offered as to why the poorer countries have contributed the lion’s share of all UN peacekeeping troops:

First, peacekeeping pays well – at least for developing countries. It earns Bangladesh roughly $200m a year (or about a sixth of its annual defense budget). For Bangladeshi soldiers, this means higher pay while on UN operations, so that they actually rotate peacekeeping duty to give more troops a chance at an extra income.

Second, peacekeeping is an inexpensive way to maintain large armies: While a soldier is deployed with the UN, the Bangladeshi defense ministry can remove him from the government payroll. It can thus keep 10,000 soldiers in the army at no cost – and profit from the training they get while on UN duty.

Analysts in Bangladesh say an additional benefit is that an important role abroad has discouraged the army from meddling in politics at home (though the same is not true of Pakistan).

Beyond that, Bangladesh has managed to leverage its commitment to UN peacekeeping with influence at the UN: improved ties with powerful nations, improved trade relations, and seats on UN bodies.

That the incentives for any country to commit troops to peacekeeping missions are not purely altruistic should be no surprise. But is this bad per se? And does it influence the performance of the peacekeepers? According to some sources, Bangladeshi soldiers are in demand because they have gained a reputation for their discipline and professionalism. Others, such as Roméo Dallaire, the former Force Commander of the UN Mission in Rwanda, have heavily criticized them, highlighting their lack of commitment, and the fact that they seemed to have been deployed for purely selfish aims: i.e., for the training, money and equipment they would take home with them once the mission was complete.  But whatever the truth here, the fact remains that three South Asian countries – Pakistan, Bangladesh, and India – provide more than one third of all UN peacekeepers.

See how informative a pub quiz can be?

Let’s see what else you can learn in the ISN’s very own Pub Quiz: