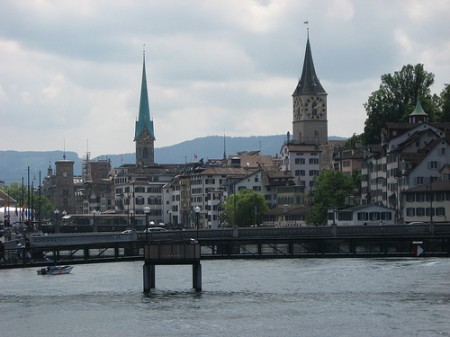 Roman Polanski went missing in Zurich upon his arrival for the Zurich Film Festival.

The festival’s welcome comittee waited in vain at the airport for the director of such brilliant films like Rosemary’s Baby (1968), Chinatown (1974) and The Pianist (2003). He received an Oscar in absentia for the latter; in absentia because he has been a fugitive from US justice since 1978 when he pleaded guilty to having drugged a 13-year-old girl and forced himself upon her.

Instead of facing jail time, Polanski escaped to France, where he was safe from extradition to the US. Since then Polanski has been very careful not to travel to countries where the long arm of US justice might reach him.

However, this finally happened on Saturday when Zurich police arrested the 76-year-old on an international arrest warrant. It didn’t take long for the Swiss art and film scene to decry and condemn the move as “a slap in the face for the entire cultural community in Switzerland.”

Conspiracy theorists quickly pointed out the fact that Polanski had traveled to Switzerland before and even owns a house in the fancy mountain village of Gstaad. They believe that Switzerland wanted to suck up to the US authorities after the legal troubles of UBS and the attack on the country’s banking secrecy laws.

These theories however are probably complete nonsense.

It’s a fact that the intelligence on Mr Polanski’s arrival came directly from the US justice department, which based its arrest order on an international extradition treaty. It acted upon the request of the Los Angeles county district attorney’s office, who learned about his planned trip to Zurich from the internet, where it was widely announced.

Based on international law the Swiss authorities had no choice but to arrest him. There is nothing scandalous about it.

The real scandal is the way how the Swiss and international art scene, as well as France and other European countries, were and are protecting Mr Polanski despite the severe crime he comitted. Just because he is a brilliant director, it seems, for them he is above the law. “Oh he did it 30 years ago!” or “His victim has forgiven him,” or even “He suffered so much through his life” are the some of the justifications that have been heard.

A case in point is Joane Z Shores’ Swiss bashing post at the Huffington Post. Some Swiss artists are openly “ashamed of their country.”

These statements are obviously based on the view that Mr. Polanski has redeemed himself through his brilliant work or some twisted view that what he did was some sort of pecadillo. To anyone who agrees, I would recommend reading the transcript of the official hearing of the girl.

The facts: Mr Polanski drugged a 13-year-old girl and forced her to participate in sex acts against her will.

It is about time he takes center stage in another venue: a court of law.

3 Responses to “Frantic in Zurich”