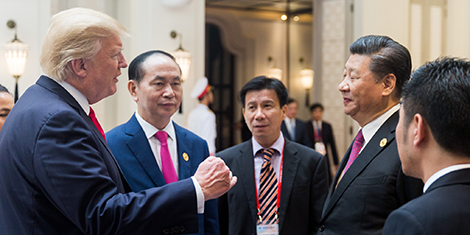 This article was originally published by Pacific Forum on 5 February 2019.

President Trump came into office with strong prior beliefs about the failure of US alliance policy and the need for allies to pay for US defense efforts on their behalf. Some feared that he presaged a rising isolationism among the American public that would support a president seeking to pull back from US commitments overseas. But Trump is failing to lay the groundwork for a new approach to the Indo-Pacific. Instead, the US is pursuing a two-track Asia policy, with Congress and the administration reading from different scripts. And the public is only on board with one of those approaches.

With his second one-on-one summit with Kim Jong Un coming up, Trump is certainly taking US policy in Asia in some new directions. But at home, it’s generating pushback on both sides of the aisle. Massachusetts Senator and 2020 presidential contender Elizabeth Warren’s first major foreign policy speech (and accompanying Foreign Affairs article) blasted Trump’s foreign policy, which she argues is “undermining … crucial alliances with Japan [and] South Korea.” At the same time, the New York Times notes a “growing chorus of Republican critics for Trump’s foreign policy,” with Republican hawks particularly concerned about Trump’s upcoming summit with North Korea’s Kim and what concessions he may make to the DPRK.

Matching this level of bipartisan concern over the direction of US foreign policy, Congress is taking a different and more active tack on US Asia policy. Though the 115th Congress ended in deadlock, leading to the longest-ever partial government shutdown, it also saw action on several bipartisan legislative initiatives on America’s policy in Asia. These included the Taiwan Travel Act, passed in March 2018, which was welcomed in Taipei and condemned in Beijing, as well as the bipartisan passage of the Asia Reassurance Initiative Act (ARIA). ARIA authorized $1.5 billion in US spending for a variety of programs in the Indo-Pacific.  Rep. Elliot Engel (D-NY), then the ranking member and now chairman of the House Foreign Affairs Committee, praised the bill at its passage, saying ARIA “articulates a bipartisan policy towards the Indo-Pacific [and] sends a message to Asia and the world that the United States is investing in our allies and our strategic priorities.”

This congressional action, aimed at reassuring allies across the region of US commitment, is also squarely in line with American public opinion. In a trend that predates the Trump administration, Americans have become more likely say that the United States should place a higher priority on building up strong relations with traditional allies such as Japan and South Korea, even if this diminishes US relations with China. Today two-thirds of the public (66 percent) back this position, up from a low of 53 in 2012. Conversely, support for building a new partnership with China, even if it might diminish US relations with traditional allies, has fallen over the same period (26 percent, down from a high of 40 percent in 2012).

And in an era of widening polarization, this embrace of America’s Asian allies is a rare example of growing bipartisanship among the public. In 2010, Republicans were notably more likely to favor strong relations with traditional US allies, while Democrats were split between embracing those allies and seeing a new partnership with China. Today that gap has vanished, with two-thirds of Republicans, Democrats, and Independents all saying the US should focus on building strong relations with allies like South Korea and Japan.

The public is also moving in the opposite direction of Trump when it comes to US military bases in Asia. The administration’s recent year-long fight with South Korea over host-nation support raised the prospect that Trump could order a withdrawal of US troops from South Korea, a move that would be in line with his past rhetoric about the US military presence abroad. With the US seeking another round of negotiations, and little support among South Koreans for giving in to US demands, the threat of US withdrawal will continue to be a live issue under Trump.

In sum, Congress and the public alike, across partisan lines, are rejecting with increasing strength the president’s approach to US allies in the region.  Trump and Congress are now taking contradictory approaches to the Indo-Pacific, resulting in a two-track policy agenda. Trump’s inability to persuade either Congress or the public to take his side in these disputes suggests that the Trump-style policy agenda toward US allies in Asia will not last beyond the Trump administration.

Craig Kafura is a research associate for public opinion and foreign policy at the Chicago Council on Global Affairs, a Security Fellow with the Truman National Security Project, and a Pacific Forum Young Leader. You can follow him on Twitter @ckafura.