“The Longest Sought, Hardest Fought Prize” – A New Boost for the CTBT? 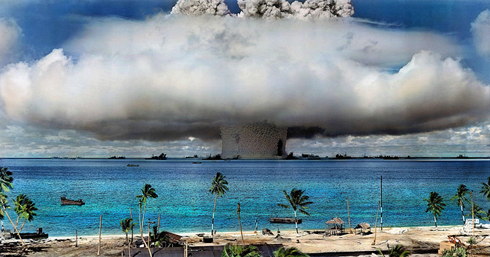 A nuclear weapon is detonated at Bikini Atoll in the Marshall Islands in 1946. Image: International Campaign to Abolish Nuclear Weapons/flickr

In defiance of international warnings, North Korea recently went ahead with its third nuclear test. On 12 February, an explosion was set off in the country’s northeast, close to the location of the two previous nuclear tests in 2006 and 2009. Pyongyang promptly declared the test a success, with its state-owned news agency announcing that the nuclear device was smaller and lighter yet more powerful than previous devices. International condemnation was swift and unambiguous. The UN Security Council – including North Korea‘s sole major ally China – strongly condemned the test and vowed to take further action against Pyongyang.

Since 1998, North Korea is the only country known to have tested a nuclear weapon, an act which is now regarded as highly provocative and the behavior of a ‘rogue state’. And yet nuclear testing is still not banned under international law. Indeed, the treaty that would prohibit all nuclear tests – the Comprehensive Nuclear-Test-Ban Treaty (CTBT) – has now been in limbo for more than 15 years.

How Testing Lost its Appeal

More than 2000 nuclear devices have been exploded – above ground, underground, under water and even in lower outer space – since the bombings of Hiroshima and Nagasaki. In 1962, the year of the Cuban Missile Crisis, there were over 170 nuclear tests. During the ‘heydays’ of atmospheric nuclear testing, mushroom clouds could regularly be seen rising from the main American test site in Nevada. Las Vegas proudly branded itself the ‘Atomic City’ with postcards depicting the city with a nuclear explosion in the background. However, nuclear testing gradually lost its appeal as a result of the growing awareness of the long-term effects of nuclear fallout. In 1963, a Partial Test Ban Treaty (PTBT) came into effect which banned testing in the atmosphere, under water and in space – but not underground. The PTBT helped to significantly reduce radioactive fallout from nuclear testing; but it did virtually nothing to halt the testing itself.

A Treaty in Waiting

A comprehensive ban on nuclear testing – the CTBT – was agreed upon in 1996, but has not yet become international law. This is due to its unusually stringent formula for entering into force: the CTBT will only come into effect after the 44 states which possessed advanced nuclear technology at the time the treaty was drafted have signed and ratified the final document. The list of hold-out states reads like a list of ‘usual suspects’: China, Egypt, India, Iran, Israel, North Korea, Pakistan and the United States. Most of these countries – with the exception of India, Pakistan and North Korea – have signed but not yet ratified the CTBT.

Ironically, US president Bill Clinton was the first world leader to sign the treaty, famously calling it “the longest sought, hardest fought prize in arms control history”. Momentum for the CTBT was, however, halted by the Senate‘s 51-48 vote against CTBT ratification in 1999. Clinton‘s successor, George W. Bush, was by no means a fan of the treaty claiming that: “It is not verifiable. It is not enforceable. And it would stop us from ensuring the safety and reliability of our nation’s deterrent, should the need arise“.

Little Chance of Hiding an Explosion

Many international treaties are neither fully verifiable nor enforceable. In the case of the CTBT, however, the treaty is backed up by a strong verification system which – once completed – will consist of 337 monitoring facilities worldwide. About 85% of these facilities are already up and running and helped to detect all three North Korean nuclear tests. Highly-sensitive seismic, hydro-acoustic and infrasound technology is used to ‘feel’ and ‘listen’ for any sign of a potential nuclear explosion. The system also includes radionuclide stations and laboratories that are able to detect radioactive debris from nuclear tests – and not only nuclear tests. Monitoring data can also be used for a range of civil and scientific applications, such as tsunami warnings. Radionuclide stations designed for CTBT verification were instrumental, for instance, in the tracking and forecasting of radioactivity from the destroyed Fukushima reactors.

All collected data is transmitted in real time to the organization in charge of the treaty, the Comprehensive Nuclear-Test-Ban Treaty Organization (CTBTO), where any ‘suspicious event’ is further analyzed by specialists. In case of the recent nuclear test by North Korea, preliminary information on location and magnitude was made available in little more than an hour and two hours ahead of Pyongyang’s official announcement. The advanced technology of the monitoring system makes it highly unlikely that any nuclear explosion on earth would go unnoticed, even if its power was well below 2 kilotons (by comparison, the Hiroshima and Nagasaki bombs had a yield of 10-20 kilotons). And unlike national seismic services, the CTBTO makes its data available to all member states.

Time for the US to Act

The United States already has the largest stockpile of nuclear weapons in the world and ratification of the CTBT would not change that. Within the framework of the US Stockpile Stewardship Program, the effectiveness of these weapons is tested regularly with the help of complex computer modeling. A report published by the U.S. National Academy of Sciences (NAS) early last year confirmed that the United States has the technology to ensure the reliability of its own arsenal without resuming nuclear testing. The NAS panel concluded that the US Stewardship Program “has been more successful than was anticipated in 1999”, when the CTBT was rejected by the Senate.

Given the United States’ unique technological capabilities, it appears that ratification of the CTBT would not threaten the effectiveness of its nuclear deterrent. However, securing the Senate’s approval for ratification will remain a challenge. But there are also lessons to be learned from the 1999 vote on the CTBT. A renewed attempt to push for ratification will have to be framed by a strong and sustained campaign that sufficiently communicates not only relevant political but also technological issues.

US ratification of the CTBT would also increase the credibility of Washington’s position on the North Korean and Iranian nuclear programs. And if China was to ratify the CTBT, that would finally make all permanent UN Security Council members full parties of the treaty. This may leave Pyongyang and Tehran unimpressed, yet other hold-out states, such as Israel or Egypt, might find themselves under increased pressure to follow the example set by Washington and Beijing.

In his famous 2009 Prague speech US president Barak Obama announced that „[a]fter more than five decades of talks, it is time for the testing of nuclear weapons to finally be banned.“ In the light of North Korea‘s recent nuclear test, now is the perfect time for the Obama administration to make a decisive push for CTBT ratification.