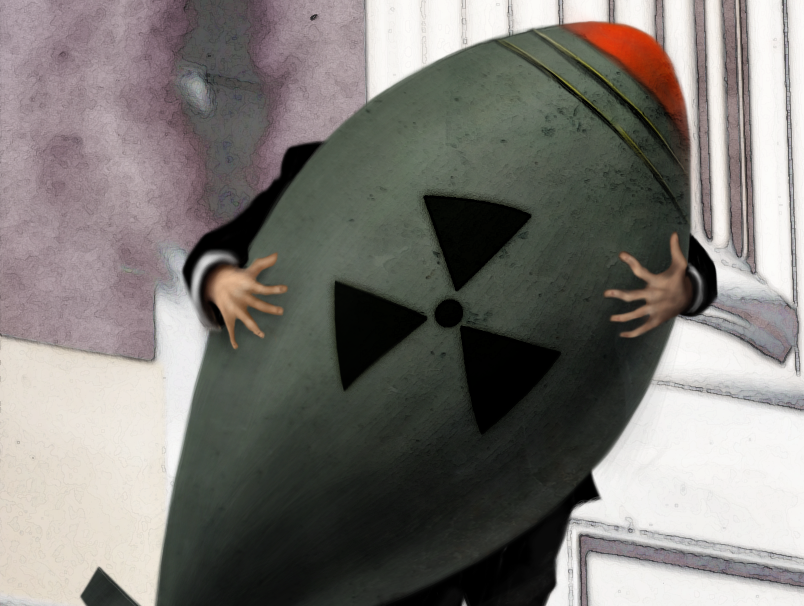 This article was originally published by the Harvard International Review on 20 August, 2015.

The “Ukraine crisis” concerns more than lofty European values, Ukrainian humanitarian issues, or abstract international law. Russia’s attack on Ukraine is also an assault on the world’s nuclear nonproliferation regime. It subverts the logic of the 1968 Treaty on the Non-Proliferation of Nuclear Weapons (NPT). Given its purpose of curtailing the spread of weapons of mass destruction, namely nuclear missiles and atomic bombs, the NPT is one of the most important international accords in human history.

Ukraine, at its independence in 1991, inherited the world’s third-largest arsenal of nuclear warheads. While most of the atomic weapons left behind by the Soviet regime were not immediately deployable, as the “black suitcase” remained in Moscow, Kyiv theoretically could have reset the Soviet fire control systems. At the beginning of 1992, the Ukrainian armed forces possessed numerous inter-continental ballistic missiles, long-range bombers, and their payloads, as well as many more nuclear warheads totaling 15% of the former Soviet nuclear arsenal, with enormous destructive potential. If Ukraine had retained even a fraction of these weapons, today it would be a feared nuclear power.

However, under diplomatic pressure from both Moscow and Washington, Ukraine quickly turned over all of its nuclear weapons to Russia. To be sure, the Ukrainian leadership did initially get cold feet: after signing the Lisbon Protocol in 1992, which obligated Ukraine and other ex-Soviet countries to surrender their nuclear weapon, it delayed the Protocol’s ratification for several months. In Kyiv, there was already suspicion that their northeastern neighbor could one day seek to exploit the defenselessness of “Little Russia,” as Russian nationalists often refer to Ukraine.

Yet at the 1994 CSCE summit in Budapest, all five permanent members of the UN Security Council assured Ukraine of its territorial integrity, national borders, and political sovereignty. Three did so in a multilateral document (Russia, the United States and the United Kingdom) signed with Ukraine, while the other two (China and France) issued unilateral declarations. In the Budapest Memorandum on Security Assurances, Russia, the United States, and the United Kingdom also assured Ukraine against economic and political pressure, and promised immediate consultations should these provisions be infringed upon.

As we know, most of these promises have been broken. Russia has not only trampled the 1994 memorandum and numerous other multilateral agreements on the inviolability of European borders, but it is also in flagrant breach of a series of bilateral agreements between Moscow and Kyiv that were once initiated and co-formulated by the Kremlin. After its annexation of Crimea by military force – a kind of border change that has become rare since 1945 – Russia has covered eastern Ukraine with a hybrid yet bloody war – with thousands of dead, tens of thousands of injured and hundreds of thousands of refugees to date. At the same time, Russia is waging a concerted trade and information war against Ukraine. Among other means, it uses large-scale military exercises on the Russian-Ukrainian border to purposefully poison the economic and investment climate of its “brother country.” As a result of these machinations, the Ukrainian state faces the threat of national insolvency and even complete collapse.

The West and China’s indirect complicity in the subversion of both Ukraine’s democratic revolution and humanity’s non-proliferation regime is often overlooked. To be fair, the US, EU, and other countries have shown their support for Kyiv and international law by providing financial help for Ukraine as well as enacting individual and economic sanctions against Russia. Beyond their direct effects on the Russian economy, these sanctions undermine worldwide trust in the prospects of the Russian market, and amplify the Kremlin’s problems caused by low energy prices. This combination has led to a devaluation of the ruble, shrinking of Russia’s GDP, depletion of Moscow’s foreign currency reserves, and an increasingly painful inflation.

Yet, despite all this, the West remains Russia’s most important trade and investment partner. Many EU countries continue to purchase enormous amounts of oil from Siberia, whose hefty export duties pour into the Russian state budget every month (natural gas plays a smaller role than often assumed). With the integrity of the Russian economy and state budget structurally dependent on public and private revenues from the sale of crude and refined oil, the so far undiminished energy imports from Russia have made the EU an involuntary co-sponsor of Moscow’s foreign policy adventures in Georgia, Moldova and, above all, Ukraine.

The West’s timid economic reaction to Russia’s aggression appears even more curious in light of the fact that oil is fungible. This means that EU countries could, without substantial difficulty, replace most crude oil imports from Russia through contracts with other oil exporters. After this summer’s expansion of the Suez Canal, a significant increase of oil imports via tankers from the Middle East has, for instance, become more feasible. However, the EU has not taken this step, due to a mundane mixture of ignorance, convenience, and lobbying.

Worse, while Western countries have punished Russia with only moderate sanctions, Moscow’s allies in the BRICS group have been recently courting rather than reprimanding the Kremlin. At a pompous BRICS summit meeting in Russia in July 2015, Brazil, India, China and South Africa reiterated, in their Ufa Declaration, their earlier opposition to the West’s sanctions against Moscow. Most notably, China, though itself a party to the 1994 deal on Ukraine’s nuclear arsenal, has avoided taking any clear position on Russia’s conduct on Crimea and in the Donets Basin. While Beijing had, in 1994, expressed its respect for Ukraine’s territorial integrity, in a governmental declaration to Kyiv, it was the only permanent Security Council member that abstained from the 2014 UN General Assembly vote condemning the annexation of Crimea. Instead, Beijing is purposefully trying to extract the greatest possible political and economic benefit from the growing discord between Moscow and the West. With its self-serving tactics, China is strengthening the perception that the official nuclear powers will ignore basic foundations of the NPT when it comes to asserting their national interests at the expense of non-nuclear states.

To be sure, the problem of irresponsible inconsistency is not only China’s. In July 2015, a group of ten French parliamentarians, most belonging to the Republicans of former President of France Nicolas Sarkozy, visited occupied Crimea. By doing so, the conservative deputies were violating the spirit of the Western sanctions regime against Russia’s annexation of the peninsula – as well as implicitly of the NPT. The unashamedly publicized trip, which caused consternation across Europe’s elites and jubilation in Moscow, ran counter to France’s 1994 assurance to Ukraine that it would “respect the independence and sovereignty of Ukraine in its current borders” and uphold principles “according to which borders cannot only be modified through peaceful means and mutual agreement, and the participating States refrain from using threats or force either against the territorial integrity or the political independence of a State, or through any other means incompatible with the goals of the United Nations.”

At the moment, Western leaders seem primarily occupied with the threats posed by antagonizing Russia. Yet the consequences of not holding Russia accountable for its actions reach far beyond Ukraine. In view of the above, the NPT has been rendered de facto void: in exchange for dismantling its nuclear weapons, three atomic UN Security Council members grant the disarming country collective, explicit, and written security assurances in an international agreement. Twenty years later, one of these great powers demonstrates to the world that almost all of those assurances are invalid. What country without nuclear weapons or no close alliance with a nuclear power can now be assured of the inviolability of its borders? If a veto power on the UN Security Council, furnished with special privileges, can expand its territory at the expense of a neighboring country, then the international non-proliferation regime transmutes into a vehicle for the official atomic powers to advance their own agendas.

The NPT can no longer be counted on to restrain nuclear proliferation. In the Russian-Ukrainian conflict, the Treaty has facilitated the Kremlin’s coldly calculated deployment of weapons of mass destruction, or the threat thereof, in order to support an aggressive foreign policy. After all, a key reason for the West’s restrained military support for Ukraine lies in Russia’s overkill capacity and the fear of provoking a third world war. Against this backdrop, implementation of the NPT has caused the opposite of its intended aim: using nuclear deterrence for offensive and not defensive purposes, Russia has taken advantage of the non-proliferation regime in order to consolidate illegal territorial gains obtained through use of force. This precedent means that the present-day NPT, with its the privileges for permanent UN Security Council members, could in the future encourage rather than stem the construction or acquisition of weapons of mass destruction.

If Ukraine, formerly the world’s third-largest atomic power, can be treated this way after having naively given up its post-Soviet nuclear arsenal, what kind of support can non-nuclear states expect to receive in a crisis situation? Having seen Russia’s deception, China’s studied refusal to stake a position, and the three Western Security Council powers’ hesitance, safeguarding territorial integrity will again be the sole matter of national states. When a guarantor of the international non-proliferation regime so demonstrably questions the inviolability of borders, the message to some current and future national leaders may be: possessing one’s own atomic deterrent is the only effective instrument for ensuring a state’s full sovereignty.

Dr. Andreas Umland is a Senior Research Fellow for the Institute for Euro-Atlantic Cooperation at Kyiv, and General Editor of the ibidem Press book series “Soviet and Post-Soviet Politics and Society” in Stuttgart. He is a former Thyssen Fellow at Harvard’s Weatherhead Center for International Affairs where he published, in 2002, the paper “Toward an Uncivil Society? Contextualizing the Recent Decline of Extremely Right-Wing Parties in Russia,” which can be accessed by following this link: http://wcfia.harvard.edu/publications/toward-Uncivil-Society-Contextualizing-Recent-Decline-Extremely-Right-Wing