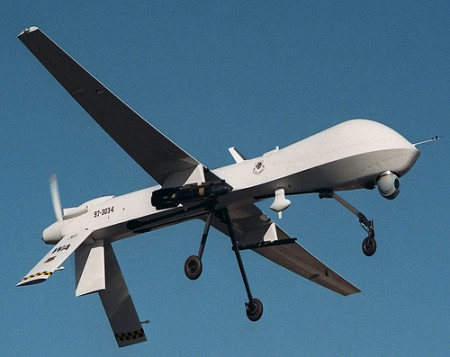 Current and Future Capabilities of UAVs in International Humanitarian Interventions

Aerial surveillance and remote sensing are nothing new in the world of combat reconnaissance, but they are new tools in the arsenal of the humanitarian relief and development communities. And they are rapidly evolving. Complex, disaster, and rapidly evolving environments all require the capability to promptly collect, analyze, and disseminate critical information that UAVs can gather and exploit in ways and quantities that other resources cannot rival.

Away, but not apart, from wars

In addition to the myriad uses of UAVs in combat environments—including non-kinetic roles—discussed in the previous installation of this series, UAVs can also serve as neutral observers for ceasefire monitoring or other peacekeeping missions.

Unlike data reported by humans, the information collected and conveyed by drones is inherently neutral. When information is delivered based upon objective rather than subjective collection practices, it is easier to make more accurate assessments of issues. The state of affairs depicted in the raw imagery and the resulting analytical products are based on factual observations and serve as a force multiplier and verifier of human-collected information or verbal reports.

This observation capability would be incalculably valuable for the monitoring of atrocities or, more sadly, the discovery and documentation of mass graves. Although recent reports out of Syria leave little to the imagination about which forces committed what indiscriminate offensive movements, it would be valuable to have real time video footage of the events both for immediate proof to the outside world and future prosecution. Such footage would also clarify situations in which the international community suspects that the rebels are exaggerating or the regime is lying.

In addition to these responsive interventions, information derived from UAV missions can be used by humanitarian organizations to avoid potentially dangerous situations, such as accidental incursion into inhospitable areas or the ability to locate hostile forces in close proximity to neutral or civilian populations. Small Tier 1 systems are regularly used to conduct route reconnaissance in combat situations, and there is no reason why humanitarian organizations should not exploit the same technological capabilities to increase their mobile security in high-risk environments.

Although it doesn’t always happen in the public eye, the U.S. military is responsible for a lot of humanitarian work, and unarmed drones have contributed immensely to peaceful interventions and conflict mitigation in ways that would have been traditionally prohibited.

UAV operators working in Afghanistan, s discussed in the previous installment of this series, have, learned to recognize that when certain nomadic movements or patterns are disrupted, it often means that a member of the population is severely ill or that there is another serious issue at hand. The operator is then able to notify nearby parties on the ground, who can act to make contact with the target population and offer assistance as necessary.

Similarly, the same type of pattern of life movement tracking can help monitor population and refugee flows. The adaptation of this process for NGOs and other humanitarian populations could prove immensely valuable, especially in instances that involve mass movements of people with no formal transit systems, or one-off migrations that can be extremely arduous and trying. The Lost Boys of Sudan gained recognition because of their plight, and though the international community repeatedly says ‘never again’ to such tragedies, the same thing is happening again. In such instances UAVs could easily be employed to deliver emergency supply drops in remote areas, or to use technology like infrared sensing to detect groups of fleeing refugees or hiding combatants.

The use of UAVs to monitor and assist these populations through such measures as establishing safe passage corridors, delivering emergency care package drops, projecting refugee flows and trajectories, and preparing camps for mass influxes can help aid organizations make contact with underserved and under resourced populations and expand their activities to assist the most vulnerable populations.

Taking Humans out of Humanitarian Interventions

As veteran UAV operator Chad Rader reflected, “I believe many more people can be saved [with UAVs] than with traditional means.” From victim identification and rescue to avoiding the threat of putting pilots into dangerous environments, using autonomous drones or remotely piloted aircraft to patrol and monitor events of humanitarian concerns is an increasingly valuable attribute of the technology.

In both slow onset and rapidly emerging natural disasters, Mr. Rader also sees the value of UAVs because their use, “Takes the danger away of losing a pilot or copilot.” In environments like wildfire search and rescue missions where a single gust of wind can take down an aircraft and its crew, UAVs would enable the undertaking of more carefully calculated high-risk, high-reward missions. Again, unmanned systems could help locate victims using a diversity of sensors, as well as determine the safest locations for populations to remain in.

Furthermore, the lighter payload and longer flight time capability of UAVs allow for more comprehensive situational awareness than could be allowed by traditional human monitoring. In addition to having longer flight time and loiter tolerance, the recording devices carried by the unmanned vehicles have the ability to collect flight recordings that can be revisited for further analysis or chronological reach back.

In environments where traditional communication infrastructure is down, UAVs have the ability to operate autonomously and to perform a mission without traditional technological restrictions or limiting factors. For example, researchers are working to develop a group of unmanned drones that could be deployed over disaster areas to reestablish communications capabilities by creating a wireless network.

There have been few, but valuable, demonstrated victories with the use of UAV responses to natural catastrophes. Disaster evaluation and response has been one of the proven arenas in which UAVs have successfully achieved missions that humans could not, be that for environmental (nuclear radiation) or logistical (geographic access) impediments.

The Japanese tsunami and subsequent Fukushima nuclear disaster of March 2011 was assessed by an American military UAV, which collected data and imagery to help responders understand the extent and severity of the damage inflicted. Fourteen months earlier, imagery from UAV flights over Haiti was evaluated to measure the earthquake’s damage to infrastructure, and thereafter to help with resource allocation planning and execution. This key past performance should be drawn upon to compile best practices for the application of this technology to humanitarian interventions.

Despite such successes, there are still great lengths to go in terms of achieving successful and efficient collaboration. Interagency collaboration within a national system can prove to be difficult enough without having to address issues of international collaborative hurdles and sovereignty issues. Few peacekeeping interventions have taken advantage of the technology’s potential to date, and emergency responders have a long way to go before they efficiently exploit UAV capabilities to help save the largest number of lives possible.

Whitney Grespin has worked in contingency contracting and international development on four continents. She currently specializes in intelligence sector reform and capacity building. This article was originally published as part IV of an on-going series at the global affairs magazine, Diplomatic Courier, and is republished here with DC’s generous permission.

For additional reading on this topic please see:
The Military Utility of Drones
Robot Warriors
Drone Attacks, International Law and the Recording of Civilian Casualties of Armed Conflict