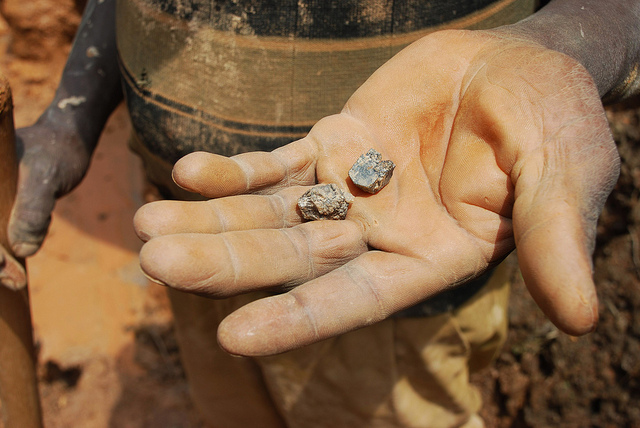 Twenty-four trillion dollars. It is a number that beggars the imagination, almost 40 percent of the global economy, and according to a recent UNEP report it is buried in one of the world’s poorest and most violent countries: The Democratic Republic of Congo. Failed state, rape capital of the world, humanitarian catastrophe…Congo personifies all these but beneath the surface its dark earth holds $24 trillion of copper, cobalt, coltan, the bones and blood of information age manufacturing. For this reason, if for no other, the world cannot ignore Congo. It can’t afford to. Called Congo’s “deal of the century”, in 2007 China recognized the beleaguered nation’s importance to the global economy with an unprecedented $9 billion resources-for-infrastructure agreement which holds the potential to unlock Congo’s vast mineral wealth and improve the material lives of its seventy-one million people with new roads, rails, hospitals, and universities. Now, five years later, Congo’s eastern frontier remains a lawless battleground with conflict minerals undermining regional stability and the $9 billion question remains: Will Chinese investment be the cornerstone for Congo’s development or a grave marker for dead dreams in the green hills of Africa?

With incredible resource wealth and the land mass of Western Europe, Congo is a country whose staggering economic potential is matched only by its poverty and corrupt mismanagement. Congo ranks last on the UN’s human development index and Transparency International’s 2011 corruption perception index ranks Congo at 168, tied with Libya which was at the time engulfed by civil war. In human terms the development reports shuffled around New York and Geneva read like damning tarot cards to the Congolese people. Life expectancy is less than 48 years. One of five children will die before age five. Sixty percent of the country’s 71 million people live on less than $1.25 per day. More than 400,000 women a year are victims of sexual violence, a fact prompting UN special Representative Margot Wallstrom to call Congo “the rape capital of the world”. On the grounds of these statistics it is difficult to see why China would invest $9 billion in this country-cum-humanitarian crisis, but looking beneath the surface China’s interests immediately become clear: immense deposits of copper, cobalt, tin and coltan; the life blood of Chinese manufacturing.

It is a profound irony that Congo, rated by the IMF as the world’s poorest country, is widely regarded as the world’s richest in natural resources with wealth estimated at $24 trillion. Much of this wealth is buried in mineral deposits whose size is a catalog of the hyperbolic: Congo is the 5th leading producer of tungsten and 6th of tin, holds 5% of the world’s copper and 50% of cobalt. Moreover Congo possesses an estimated 80% of all known coltan which, refined as tantalum, is a vital component of computers, personal electronics, and the world’s 5.6 billion mobile phones. This cached wealth, vital to the world’s present and future economy, is why Congo cannot be overlooked and why China has taken particular notice.

China views Africa as a major commodities source and Congo’s $9 billion “deal of the century” is a natural extension of their ongoing resources-for-infrastructure policy. In 2004 China approved a $2 billion public investment package for Angola and two years later struck a $3 billion deal with Gabon who would receive dams, railroads, and ports in return for Chinese access to iron ore reserves. This was followed in 2009 with similar deals in Guinea and Zimbabwe amounting to $7 and $8 billion respectively whereby resource wealth would underwrite Chinese infrastructure investments. Under Beijing’s strategy of mutual benefit China stokes its economic fire with African resources while resource-rich but credit-poor countries further develop their economies with Chinese infrastructure projects. With Congo’s vast mineral deposits and critical development needs a Chinese resources-for-infrastructure deal would seem an inevitable and mutually beneficial arrangement.

China’s initial $9 billion investment was later revised under IMF objections to $6 billion with half going to mine development and half to infrastructure projects and represents an investment significant enough to radically transform Congo’s economy. Many aspects of the deal are not public, but according to NGO Global Witness China would be granted 10 million tons of copper and 600,000 tons of cobalt. In exchange China would build 2,400 miles of roads and 2,000 of rail, 145 health clinics, 32 hospitals, two universities, and two hydroelectric dams. Other infrastructure projects include widespread transportation renovation and an electricity distribution network. The other $3 billion of Chinese investment would go to develop Congo’s copper and cobalt mines which are expected to turn a profit in 2013, repaying Chinese investment in five years. Despite the high cost China believes their “mutual benefit” investment will prove worthwhile as mines are expected to produce $40 billion to $120 billion in revenues. With significant Chinese investment at steak and profitability on the horizon, Congo’s fragile government hopes their buried wealth will set the groundwork for successful economic development and has begun courting other countries, notably South Korea, for significant investment deals. However, the arc of history has seldom bent in Congo’s favor and unresolved crises of the recent past threaten both China’s ambitions and Congo’s future.

In 1994 the world watched Africa in horror as some 800,000 people were killed without regard for sex or age over the course of some hundred days; it was the Rwandan Genocide and commanded global guilt if not global action. In March, 1998, President Bill Clinton stood on the tarmac of Rwanda’s Kigali airport and expressed to on looking crowds his failure to stop the genocide was the “biggest regret” of his presidency. Only six months later residual Hutu-Tutsi hostilities ignited the Second Congo War which lasted five years, directly involved eight African nations and twenty-five armed groups, claimed 5.4 million lives, and garnered little global attention. While the deadliest conflict since WW2 may have been initiated by deep ethnic and political tensions, the violence and bloody aftermath which perpetuates today was driven in large part by something deeper still: Congo’s mineral wealth.

Many of Africa’s resource-rich countries emerge from years of civil war with residual conflict zones, but in this case Congo is in a tragic class of its own. The enduring legacy of the Second Congo War is the continuing conflict in Congo’s eastern provinces which abut Rwanda and threaten to derail China’s plans. Known as the Kivu Conflict, in 2004 this armed struggle between government forces and rebel militias picked up the Second Congo War’s bloody baton and continues today due to innumerable artisanal mines funding a perpetual conflict whose brutality includes mass rape, mutilation, and cannibalism. The UN believes over 50% of the region’s 200 mines are controlled by armed forces which employ illegal taxation, extortion, forced labor, and violence to ensure the flow of mineral wealth. According to one CNN report eastern Congo’s armed groups generate some $180 million through the illicit trade of tin, coltan, tungsten, and gold which are easily traded across the porous eastern frontier and funneled into the international market. It is this border pitted with mines and studded with militias that undermines Chinese investments and jeopardizes Congo’s hopes of development.

Congo’s eastern border is an established smuggling corridor and its neighbors benefit from the re-export of conflict minerals. According to a recent UN report Rwanda has covertly supported the M23 rebel militia whose leader, General Ntaganda, has amassed a huge fortune smuggling Congo’s coltan and tin to sell internationally as Rwandan minerals. This volatile mixture of extraordinary mineral wealth, ethnic tension, and proxy armies can drag the region into another brutal war. Since fighting began last April some 200,000 people have been forced from their homes further destabilizing the region and sending refugees into Rwanda and Uganda. Local government spokesman Erneste Kyaviro described the latest conflict as “an invasion” and M23’s insurgency as a proxy army executing Rwandan military offensives. This allegation was backed by Congo’s minister of communications Lambert Mende stating “we have evidence now that Rwandese soldiers and officers are directly implicated in combat operations in DRC.”  And there appears to be evidence to these allegations. The militias are well supplied and increasing in numbers; according to a UN report rebel deserters claim they are Rwandans pressed by their own army into militia service across the border in Congo. With tensions high and 1994’s genocide still casting its shadow over the region another devastating war remains a looming and distinct possibility.

Congo’s estimated $24 trillion of raw mineral ores represent amazing potential to transform one of the world’s least developed nations and supply the global economy’s increasing demand for the building blocks of modern manufacturing. China’s resources-for-infrastructure policy holds real potential to turn Congo’s mineral wealth into tangible benefits for the Congolese people. Their contribution to the country’s transportation infrastructure alone will open new market potential for stymied economic sectors like agriculture and provide the transfer of goods and services vital for long term economic growth. However, Congo’s eastern frontier remains a lawless battleground for proxy wars fueled by the ground they fight on, claiming 540,000 lives per year and internally displacing some 1.7 million people. With Rwanda’s support for rebel militias an open secret the possibility of a Third Congo War is more present than ever and could leave Congo deep in China’s debt for all current infrastructure investments. While ongoing national and international efforts attempt to restore peace to Congo’s eastern border little progress has been achieved. Cross border tensions increase daily and only time will tell if China’s gambit marks a new day for Congo or just another false dawn.

For additional reading on this topic please see:
Black Gold in the Congo: Threat to Stability or Development Opportunity?
The Sicomines Agreement.
The Evolving Nature of Chinese Telecommunications Investment in the DRC