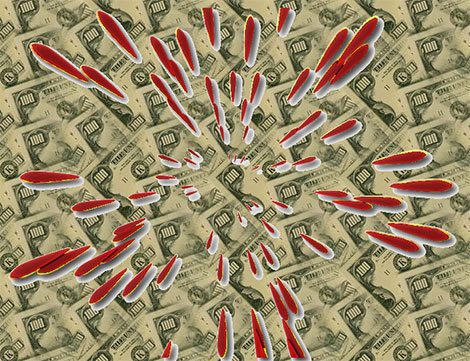 This article was originally published by World Affairs in July 2016.

It is widely understood that corruption is a pervasive problem in many societies and undermines public confidence in the political system and government institutions. The scourge of corruption is generally viewed as a symptom of a larger problem of the failure of judicial, media, and other institutions of accountability in new or developing democracies. In kleptocracies, which is the term used to designate “government by thieves,” corruption is the lifeblood of the system and therefore the heart of the problem.

Karen Dawisha, the author of Putin’s Kleptocracy and one of the foremost experts on this issue, makes the observation that “in kleptocracies risk is nationalized and rewards are privatized.” Participation in the spoils of kleptocracy is organized and controlled by top political elites, who raid state resources with immunity and impunity. Whistleblowers, investigative journalists, and others who seek to expose corrupt practices become targets of law enforcement and are treated as enemies of the state.

By denying space for moderate political voices that offer possible alternatives to existing policies and leaders, kleptocracies open the way for extremists. Altay Goyushov, an Azerbaijani scholar and a former Reagan-Fascell Fellow at the National Endowment for Democracy, has observed that by repressing peaceful activists and reformers in Azerbaijan, the kleptocratic regime in Baku “argues that it is taking steps to ensure stability. They have this exactly wrong. By eliminating moderate voices in society, Azerbaijan’s leaders set the stage for an anti-Western environment that will serve as a breeding ground for extremists, who pose a grave security threat to both the region and the West.”

Unlike ordinary corruption, which has generally been considered a problem that corrodes developing democracies from within, kleptocracies export their corrupt practices beyond their national borders with an ever-increasing impact felt in new and established democracies alike. The taking of money out of corrupt countries by kleptocrats is a long-standing practice—think of Mobutu Sese Seko’s Zaire and Ferdinand Marcos’ Philippines. But in the present hyper-globalized era, the scale and sophistication of this activity presents new and serious challenges to democracy. In this sense, and as the Panama Papers so vividly reveal, modern kleptocracy thrives by crossing borders, in the process projecting a wider, corrosive threat to democracy and its institutions.

Kleptocracy is a key pillar of resurgent authoritarian regimes that are exercising growing influence around the world. Other defining characteristics of such regimes include a crackdown on civil society, the rise of extremist movements, the failure of governance in many new democracies, the assault on democratic norms in the international system, and propaganda campaigns that are lavishly funded by international media enterprises like the Russian government’s RT. Simply put, these regimes are trying to reshape the rules of the game.

The challenge presented by regimes in Moscow, Beijing, and elsewhere is being taken to an entirely new level by virtue of their projection of illiberal values and standards beyond their own national borders. Just a decade ago, few political observers could have imagined such a development. It’s especially troubling that this growth in authoritarian ambition is taking place at a time when malaise seems to grip the world’s leading democracies.

The need to address the problem of kleptocracy is of central importance to activists who are promoting the rule of law and democratic governance in countries ruled by hybrid and autocratic governments. These activists are on the frontlines in the struggle against resurgent authoritarianism where regimes are tightening political controls and closing civic space.

One of them is Khadija Ismayilova, the courageous journalist from Azerbaijan whose investigative reporting established the links between Azerbaijani President Ilham Aliyev and his family to massive corrupt enterprises. Ms. Ismayilova was sent to prison on patently trumped up charges. The fact that her arrest and the arrest of other dissidents has not damaged Azerbaijan’s participation in Western institutions is a cause of great concern. As Gerald Knaus pointed out in a July 2015 Journal of Democracy article entitled “Europe and Azerbaijan: The End of Shame,” Azerbaijan’s kleptocracy has a profound and corrosive effect within but also beyond the country’s borders. Knaus explains in painful detail the ways in which the authorities in Azerbaijan “captured” the Council of Europe and in the process managed to neuter its human rights work.

Similarly, Rafael Marques de Morais of Angola has reported in World Affairs and elsewhere how that country’s political elite has taken personal control of virtually all of the country’s public wealth derived from minerals and, more recently, from massive investments by China. Here, too, the Angolan kleptocrats do not simply deprive their own country of critically needed resources for improving health, education, and infrastructure, but use this wealth beyond national borders to acquire an influential hand in media and financial institutions inside Portugal, an EU member state. Russia’s kleptocracy has managed similar feats in Latvia, also an EU member state.

No country has suffered more from kleptocracy than Ukraine. Deeply entrenched and, indeed, institutionalized corruption has been an extraordinary challenge since Ukraine achieved its independence a quarter century ago. But in the four years that former President Viktor Yanukovych was in power, he took the country’s corruption to new heights, enabling the theft of nearly $40 billion of Ukraine’s public wealth. This massive corruption funneled wealth primarily to the president, his relatives, and a limited circle of businessmen around the president. As journalist Oliver Bullough has observed, “In 1991, Ukraine’s GDP was about two-thirds of Poland’s GDP; now it is less than one quarter.” He notes that state corruption on such a scale has ruined Ukraine, “dooming a generation of Ukrainians to poor education, unsafe streets and blighted careers.” This ravaging of Ukraine’s economy and society brought about the EuroMaidan revolt, when millions of people rose up to extract their country from the grip of the kleptocrats and to try to chart a more democratically accountable course.

The fact that these authoritarian regimes are also kleptocratic makes the challenge facing democracy activists in such countries even more difficult because the kleptocrats have established an objective alliance with banks and other institutions that make up the global financial system. These institutions readily accept deposits of stolen funds after being laundered through offshore structures. With these assets safely invested and protected within the global system, the kleptocrats are then free to use their stolen wealth to increase their domination at home and purchase influence abroad, all the while expanding their massive business networks in the West and buying extravagantly priced properties in London, New York, Miami, and other global capitals.

The purchase of multimillion dollar properties, the arrangement of opaque offshore financial instruments, and the laundering of a kleptocrat’s public image, do not happen by accident or on its own. Professional intermediaries in the established democracies are critical links for venal kleptocrats, who seek to move ill-gotten gains from authoritarian systems into the democracies and the international finance system, where the rule of law offers their ill-gotten wealth a safe and respectable haven. As journalist Bullough observes, “only with the help of Western enablers can a foreign kleptocrat transform the ownership of a questionable fortune, earned in an unstable country where jail is often one court decision away, into a respected philanthropist” who can be photographed alongside celebrated international figures and media stars.

Anne Applebaum has noted the irony that while the rule of law prevails in Britain, “over the past couple of decades, London’s accountants and lawyers have helped launder billions of dollars of stolen money through the British Virgin Islands, among other British overseas territories.” Their complicity in kleptocracy has corroded the legal integrity of the British system. As Bullough notes, “what Western enablers do is in a sense more egregious than what foreign kleptocrats do, because in the West we have a genuine, institutionalized rule of law, while kleptocrats operate in systems where no real rules exist. The result is that Western enablers effectively undermine democracy in foreign countries, even as Western governments lecture those same countries about civil society and the rule of law.” A crucial element necessary for combating modern kleptocracy will be bringing the professional intermediaries in the West—the enablers—out of the shadows and into the sunlight.

Kleptocracy is not just a pillar of modern authoritarianism but also a serious and urgent global threat. Because it is a global challenge, it requires a response that takes the transnational nature of this problem into account. It is therefore critically important to end the symbiotic relationship between kleptocrats and the international financial system. In addition to cooperation among the world’s democratic governments, this will require helping activists and investigative journalists, who are working within kleptocratic countries to fight state theft, to connect with international actors who are trying to monitor the flow of illicit capital and block its investment in the international financial system. Both grassroots activists and international actors will benefit if they can find more effective ways of working with and supporting each other. The activists will find new allies and outlets for their investigative reports, while the international actors will gain useful contact with indigenous groups whose understanding of the way funds are stolen will contribute to the development of laws and strategies to block the receipt of these funds by the global banking system.

Greater cooperation among people fighting kleptocracy at different levels might also help efforts to alert the publics in democratic countries to the serious security risks they face if hostile autocracies are allowed to exploit their institutions and legal protections to aggrandize their own power. Just as it is urgent to end the corrupt and cancerous collaboration between the kleptocrats and their enablers, it is equally important to build a new partnership between the activists fighting for the rule of law in kleptocratic countries and potential allies in the established democracies who are committed to defending democratic values and norms. Building such a partnership will help protect our own interests and security and advance the cause of democracy at a moment when it is in peril around the world.

This article is based on testimony that Carl Gershman, the President of the National Endowment for Democracy, delivered at a hearing of the Senate Foreign Relations Committee on June 30, 2016.

Carl Gershman is the president of the National Endowment for Democracy.

One Response to “Unholy Alliance: Kleptocratic Authoritarians and their Western Enablers”