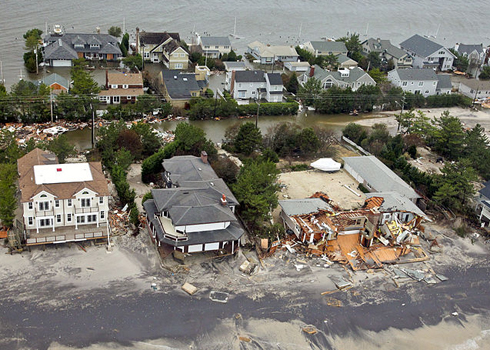 “Thank God for Sandy!” said Leviticus Sumpter, a supervisor of a mold clean-up team in New York City, to The Brooklyn Bureau.

“I’m not going to say that,” said Albert Gibbs, Sumpter’s nephew and also part of the crew. “I’m going to say, ‘Thank God for employment.’ […] One person’s mishap is another person’s blessing.”

The tragedy of thousands of lives overturned in the wake of Hurricane—later superstorm—Sandy has become a success story for the Occupy movement, bringing the group national recognition for its efforts to help their fellow man recover from a disaster with a far-reaching level of destruction (somewhat less than the infamous Hurricane Katrina).

The Occupy movement, since its celebration of its one-year anniversary and vows to continue, has slowly begun to fade out of public consciousness. Once known for its attention-garnering public encampments and confrontational protest marches through the streets of the U.S.’s major cities, it has largely shifted now to framework through which hyper-local concerns are expressed. Now, instead of hundreds marching down Wall Street, the movement is best exemplified by smaller groups helping homeowners escape foreclosure, or five or six dedicated protestors camping in front of the Veterans Affairs offices in Washington, DC.

Sandy, however, presented a human security problem of momentous proportions, striking at the heart of some of New Jersey’s and New York’s poorest, yet most densely populated areas. Even before the storm cleared, reports of the damage being wrought began to seep out. Electricity failed at New York’s Bellevue Hospital as the basement generator flooded, prompting an evacuation of the entire building; as of mid-December, the city’s hospital system had still not returned to full operational capacity. In the Queens neighborhood of Breezy Point, blocks upon blocks of homes belonging to many of the city’s first responders and others who had evacuated were flooded and burned to the ground. Although it was not on the scale of other natural disasters, reports of looting were scattered through the area; most famously, one young man, freezing and desperate, broke into a house to steal blankets, and left behind a chilling farewell note to the home’s owners and his father. He later received necessary medical treatment and was reportedly recovering.

Even still today, parts of the Rockaways, Staten Island, and Coney Island continue without power, heat, or adequate government assistance. An estimated 12,000 people in New York City alone are still without heat. Tellingly, as the first Northeasterner of the winter season approached the hard-hit area just days after Sandy blew through, the Federal Emergency Management Agency (FEMA) shuttered its local offices for the duration of the storm. FEMA and local officials are currently under fire for refusing to bring more heated mobile homes, currently located in nearby Pennsylvania, into the affected areas; in response to official claims that there is no room for such trailers in the cities, Occupy Sandy advocates and local news outlets alike are calling for clearing spaces in the yards of destroyed homes and opening otherwise empty lots for the use of the temporary housing. As was seen after Hurricane Katrina in New Orleans, large scale natural disasters overwhelm both federal and local emergency resources, leaving thousands helpless. Local, city, and Red Cross operations took up part of the mantle of relief efforts, but were criticized for inefficiency and have since been pressured to close. The current federal stalemate over any kind of government spending has particularly angered the community.

Occupy Sandy has stepped in to bridge the gap between overwhelmed government assistance programs and inconsistent charity operations, by calling on the nationwide Occupy network of people willing to not only advocate but also sacrifice on behalf of those in need in their communities.

Before the storm was over, Occupy Sandy Facebook, Twitter, and Tumblr pages had been set up, and these have been used constantly as a point of organization for the relief effort. While many Occupy pages will publish calls to action, the Occupy Sandy pages have posted very specific needs relating to the recovery: “Immediate Sandy volunteers needed in Central Jersey”; “Urgent need for Wednesday, drivers needed to bring meals to locations in Rockaway”; “We are in need of D batteries, Laundry detergent, Baby formula (non soy based), Band aids”; “Out here in the Rockaways hot coffee is still a scarce commodity.” Within weeks, Occupiers set up an Amazon “wedding registry” filled with items needed for the recovery, so those wishing to assist from any location could contribute directly to the relief effort, without bureaucratic middlemen organizations delaying the process.

Hundreds of buildings throughout the region have been infected by dangerous mold growth, but many of those in the homes worst affected have been hesitant or unsuccessful in approaching authorities for help cleaning it up. Occupy volunteers have gone door-to-door, devising impromptu pumps to empty water out of basements of donning masks to rip out and replace mold-infested drywall and flooring. For some, such as Sumpter and Gibbs, it has been hailed as a temporary employment program for those long-unemployed; however, as many as 40,000 Occupy Sandy volunteers are freely donating their service in an effort to improve the lives of those in New York City’s housing projects.

The Occupy Sandy relief effort has become a natural extension of the movement’s core philosophies: self-sustainability within local communities, and increased attention to the quality of life for the least economically fortunate of those communities. In the process, they have been able to call on their network to create a successful and well-organized recovery process, and are working to keep the human perspective of the tragedy from being forgotten amidst high-profile events—such as the 12-12-12 fundraiser concert— which too often gloss over the stories of the very people they are trying to help.