Juncker’s EU Army: a Tool of Politics More Than Defence 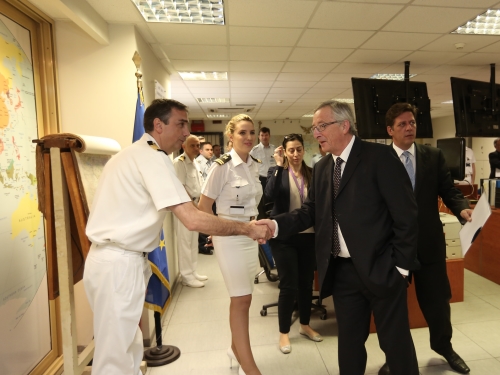 Juncker greeting members of the Greek Navy during his visit to Athens on 19 May, 2014. Image: Jean-Claude Juncker/Flickr

This article was originally published by the Barcelona Centre for International Affairs (CIDOB) on 23 March 2015.

Jean-Claude Juncker has revived the debate on a European army, an old, periodically torpedoed aspiration. In the 1950s, when the European integration process was in its embryonic phase, six nations led the European Defence Community. Its goal was to establish a supranational European army as an alternative to German rearmament, but it never saw the light of day due, ultimately, to the rejection of the country that put the initiative forward, France. In the 90s, when the Maastricht treaty set up the Common European Security Policy, its military component was also diminished by the reluctance of the more Atlanticist states to build a common European defence system.

Two decades on, there is no lack of reasons to move towards a common army. On the one hand, the EU is surrounded by a growing number of international crises that require greater focus to be given to questions of security, defence and geostrategic positioning. The crises in Ukraine, Syria and Libya are only the tip of an iceberg that some have called an “arc of instability” on the borders of the old continent. Added to this is the terrorist threat on European soil, recently exemplified by the Charlie Hebdo attacks, which has further encouraged the security focus of national political agendas.

On the other hand, the economic crisis and austerity policies have diminished national spending and capacity in defence terms. This has highlighted the need to strengthen European cooperation to avoid duplications and the squandering of defence budgets that rarely reach 2% of GDP (the goal for 2024 set by the NATO framework).

In this context, the proposal made by the president of the European Commission, Jean-Claude Juncker, to move towards a pan-European army seems to be an effective solution to the issues that member states cannot take on by themselves. And this despite the fact that common defence has traditionally been one of the points of greatest disunity between European countries. The strategic weakness of the EU when faced with unstable neighbours and the tendencies of its states towards demilitarisation should, according to Juncker, be sufficient elements to give the EU a more central role on defence matters.

Juncker’s proposal, however, has little to do with current debates on European defence. At an institutional-juridical level, the treaties leave no doubt about the primacy of member states on security and defence. The European Council and the Foreign Affairs Council are the institutions that lead the decision-making process, with the role of the European Commission that of invited guest. The treaties also recognise the fact that NATO, through its mutual defence clause, is the main guarantor of defence in European territory. Further, national dynamics have dominated the recent military operations led by member states. In the intervention that facilitated the fall of the Gaddafi regime in Libya and the fight against jihadism in Mali, the European partners preferred to take action through ad hoc coalitions, leaving European institutions aside.

But beyond the above-mentioned factors, the current discussions on European defence do not hinge on the idea of creating a pan-European army. The multiple Brussels institutions with responsibilities on this matter − such as the European Defence Agency, the Military Committee, the EU military staff and the bodies giving operational support to the Common Security and Defence Policy − focus their debates on securing commitments that have already been acquired and are embodied in the treaties.

On the one hand, permanent structured cooperation allows states to increase their military cooperation and capacities through participation in multinational forces, in European military equipment programmes, and in the activities of the European Defence Agency. On the other, the “pooling and sharing” initiative anticipates joint capacity development between member states, including cooperation on military planning and decision-making. So, if security and defence are not the key elements of Juncker’s proposal, what is behind it?

Since his appointment, Juncker’s Commission has aimed to increase its profile in foreign policy − territory traditionally reserved for member states. What stood out in the letter sent by the president of the Commission to the high representative for foreign affairs and security policy, Federica Mogherini, prior to her appointment, was the creation of the Commissioner’s Group on External Action, which is designed to coordinate the work of commissioners with external action portfolios and which Mogherini herself chairs. Subsequently, Juncker appointed the former commissioner Michel Barnier to be special adviser on defence and security policy.

Just as he did on economic matters with the Juncker Plan for employment, growth and investment, the Luxembourger has been making moves to give the Commission a leading role in debates that are central to the European agenda. Just as that plan counteracted the centrality of the Eurogroup and the European Council in the management of the economic crisis, the European army proposal has served to enhance the role of the Commission in foreign policy and defence. It may be that the initiative does not contribute to resolving the current debates on European defence and is not even a realistic proposal for the establishment of a pan-European army, but it does allow the Commission to delineate a political profile prior to the European Council meeting in June 2015, where the heads of national governments will debate EU progress on defence matters.

Pol Morillas is a Research Fellow at the Barcelona Centre for International Affairs.