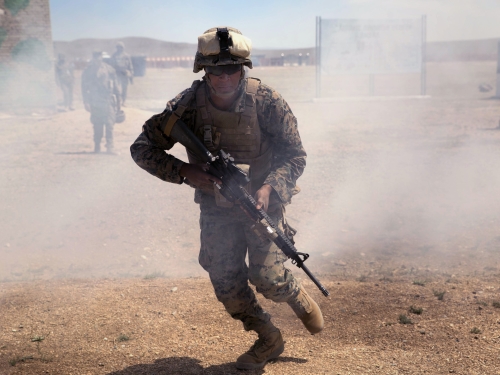 US Marine during the 2015 Khaan Quest Exercise in Mongolia. Image: Marines/Flickr

This article was originally published by Offiziere.ch on 9 July 2015.

China had previously indicated its interest in participating in the 2014 edition but ultimately decided only to send a few observers, much as it had done for the 2013 edition. In late 2013, experts indicated that China-based hackers had been attempting to target Mongolian cyber infrastructure related to Khaan Quest 2014. It is unclear whether controversy emerging from the alleged cyber-attacks was related to China’s decision not to contribute troops to the 2014 edition or if logistical factors played a role. Chinese participation in Khaan Quest is not altogether surprising, however. Mongolia is actively engaged in the Shanghai Cooperation Organization, of which China is a founding member, and China is one of the largest contributors of troops and material to United Nations peacekeeping operations.

Much as Rim of the Pacific (RIMPAC) Exercise has emerged as the largest multinational maritime exercise each year, Khaan Quest is rapidly developing as one of the broadest ground force exercise with participation from 25 countries this year. Involving more than 1,200 troops, the exercise encompasses participation from Australia, Bangladesh, Brunei Darussalam, Cambodia, Canada, the Czech Republic, France, Germany, Hungary, India, Indonesia, Italy, Japan, Malaysia, Nepal, the Philippines, South Korea, Singapore, Tajikistan, Thailand, Turkey, the United Kingdom, and Vietnam, as well as the hosts and the aforementioned role of China (see also the Mongolian Armed Forces Opening Ceremony to the Khaan Quest 2015 in the video below). As such, the exercise is rapidly establishing itself as a pillar in Mongolia’s policy of cultivating “soft power” by promoting the image of Mongolia as a responsible, multilateral-minded actor.

Another important initiative in the pursuit of Mongolian soft power was the 2012 accession of Mongolia as the 57th participating state in the Organization for Security and Cooperation in Europe (OSCE). Almost three years later, however, Mongolia has made no known contribution of personnel to the OSCE’s field missions, such as the ceasefire monitors deployed to Ukraine since March 2014. The lack of a linkage between OSCE membership and peacekeeping represents some degree of inconsistency in Mongolian foreign policy but is understandable given the Mongolian Armed Forces’ lack of strategic airlift.

At least until the airlift deficiency can be remedied, Mongolia has instead focused on positioning itself as a regional mediator and a neutral ground on which talks can be held. As recently as March 2015, the Mongolian capital of Ulaanbaatar hosted a three-day conference for officials from Central Asian countries and the OSCE’s Asian Partners for Cooperation (Japan, South Korea, Thailand, and Afghanistan) regarding the OSCE Code of Conduct on Politico-Military Aspects of Security. Through its previous role as one of the Asian Partners for Cooperation, Mongolia also hosted numerous talks and workshops for Afghan and OSCE officials. An ambition of the Mongolian government, not altogether unrealistic, might be for Ulaanbaatar to become the “Geneva of the East” and host yet higher level talks between parties to various territorial disputes, whether that is Kyrgyzstan and Tajikistan on the Fergana Valley or Cambodia and Thailand over the Preah Vihear temple (see also Paul Price, “The ASEAN Fault Lines“, offiziere.ch, 03.04.2015). This would go some way toward preventing China from strong arming neighbours into participating in talks on Chinese territory and accepting terms dictated by Chinese policymakers. Rather, through Mongolian mediation, Ulaanbaatar talks could stand a better chance of reaching conclusions that reflect the will of the parties directly engaged in a given conflict.

Whatever the role Mongolian officials envision for their country in the 21st century, Khaan Quest is an important exercise to watch in the coming years. The participation of China and other Asia-Pacific countries underscores the relevance of the exercise, but the extent to which Central Asian countries like Kazakhstan become engaged will also speak to the extent of Mongolia’s reach internationally. If Kazakh President Nursultan Nazarbayev remains disinterested in sending troops to participate or observe, there will be doubts as to the extent to which Mongolia can do more in countries to its west.

Paul Pryce is Director of Social Media at the Centre for International Maritime Security and also serves as a Research Analyst with the NATO Council of Canada’s Maritime Nation Program. Holding degrees from the University of Calgary and Tallinn University, he has previously worked in conflict resolution as a diplomatic aide with the OSCE Parliamentary Assembly and as an infantryman in the Canadian Forces.