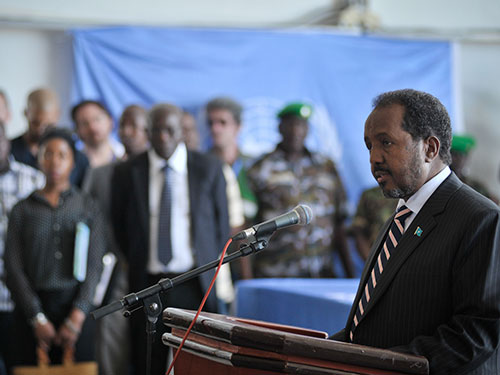 This interview was originally published by IPI Global Observatory on 25 November, 2015.

Recent pushback against Al-Shabaab extremists and a partial easing of tensions between central and state governments have increased hopes for a stable democratic future in Somalia, as it continues to recover from the civil war of the 1990s and 2000s.

Nonetheless, Professor Ken Menkhaus of Davidson College—an expert on the country’s ongoing political transition—said much work was required to recapture momentum from the 2012 establishment of a new federal government, which brought in new political and security expertise, international support, and financial investment. “Finishing a lot of transitional tasks left from the pre-2012 era is essential if the country is to move forward: to have a constitution; to have full elections,” he told International Peace Institute (IPI) Senior Adviser John Hirsch, at a recent IPI forum on 21st century peacebuilding. “Since then, a number of things have not gone terribly well. We’ve seen a prolonged period of political paralysis in the government, with a lot of in-house fighting,” Dr. Menkhaus said. He said the international community was deeply involved in Somalia, providing development and military aid, as well as applying pressure on the country’s leaders to continue their transitional tasks. This includes pushing for an election on a new head of state and a referendum on a new constitution, which had been expected next year. This interview has been edited for clarity and length.

Could you comment on the extent to which the United Nations and the African Union mission in Somalia have been able to achieve their objectives there, and what the prospects are for the coming year?

The objectives have only been partially reached in Somalia, and in some ways that is not surprising. It has been a daunting task to rebuild a state that has failed for 25 years. There was a lot of optimism when the federal government of Somalia was declared in 2012, with new blood coming into the administration, a lot of international support, Al-Shabaab on its heels, and lots of reasons to be very excited about Somalia’s prospects. That drew a lot of Somali investment into the capital, which was an added value. Since then, a number of things have not gone terribly well. We’ve seen a prolonged period of political paralysis in the government, with a lot of in-house fighting. This sometimes involves personalities and factions. Other times it has involved a debate that continues to plague the country, over the terms of federalism and the relationship between the central government and these emerging federal states. That has to be fixed. Finishing a lot of transitional tasks left from the pre-2012 era is essential if the country is to move forward: to have a constitution; to have full elections. Not much progress has been made there. There have also been security setbacks: Al-Shabaab has regrouped and is now engaging almost exclusively in terrorist attacks against high-value targets. That has meant, in some cases, terrible casualties and a loss of confidence. For all these reasons the situation is not quite as positive as we would have hoped, though there are some good pieces of news. AMISOM and the Somali security forces have continued to push Shabaab into more remote parts of the countryside in southern Somalia. We have also seen resolution of some of the tensions between federal states and the central government.

Could you say more about the strength of Al-Shabaab? What drives people toward it? What do you think the government and/or the international community needs to do, over and above a military action, to try to constrain it?

We really don’t know, because we can’t survey Shabaab supporters as to why and how many Somalis actively or passively support the organization. We do know that in some parts of southern Somalia they have been valued as a source of security and law and order. People miss that in some of the places where Shabaab has been pushed out, and they’ve actually found themselves in much less secure settings. We know that Shabaab has been very adept at exploiting local grievances, especially from marginalized social groups and clans; minority groups that feel that they’ve lost their land to more powerful clans or have not got a piece of the pie in the Mogadishu government. The good news on that score is that it’s a political problem, not a military problem, and it can be solved by the government addressing those grievances. Again, the bad news is that the government hasn’t seemed to be up to addressing grievances or doing much of anything else lately.

Kenya’s deployment of forces into southern Somalia from 2011 led to a new surge of nationalist, anti-Kenyan sentiment. This manifested, for example, in the attack on the University of Garissa this year. Do you think Kenyan involvement in seeking to constrain and defeat Al-Shabaab is useful or counterproductive?

The Kenyan intervention in southern Somalia was ostensibly to create a safe haven to drive Shabaab away from the border areas. Kenya accused Al-Shabaab of some cross-border attacks and kidnappings that were hurting tourism and targeting aid workers. The offensive and occupation of southern Somalia has been very unpopular among Somalis, and Al-Shabaab has effectively exploited that. Al-Shabaab has justified its terrorist attacks in Kenya as retaliation for the occupation. That is not entirely correct. If you look back, you’ll see that there were close to 30 Al-Shabaab minor terrorist attacks in Kenya before the Kenyan offensive. My sense is that Shabaab was already starting to shift tactics anyway to bring the war to Kenya, but the Kenyan offensive certainly handed it an excuse on a silver platter. In the short-term Kenyan forces are needed, but my own feeling is that the sooner they could be replaced by some other African peacekeeping force in southern Somalia, the better for all concerned.

The point has often been made that only Somalis can meet their political needs. On the other hand, we have this very significant investment by the United Nations, the United Kingdom, the European Union, and the United States in the country. Should they be bystanders here and let the political wrangling go on, or is there some more active role that they could play?

Even if you wanted to leave Somalia alone to Somalis, it’s not going to happen. The international community is very deeply involved in Somalia. There are peacekeepers, there’s lots of foreign aid, and there are lots of new actors; it’s not just the traditional donors. Gulf states are big players in Somali politics and aid, and you’ve also got Turkey and a range of other actors that are not going away. Really, the question is: how can Somalia move forward with this plethora of external interests and actors, some of which are creating more problems than they solve? Most of the government is underwritten by foreign aid, and donors have responsibilities not only to the Somali people, but also to their own taxpayers for accountability in the use of that money. Somalia is considered one of the most corrupt countries on earth. They’ve had huge scandals, and there have to be better accountability mechanisms put in place to change the rules of the game with regard to money. The other thing that I think the international community needs to do—which I think will be a great favor to Somalis, and Somalis would welcome—is insist that government forces that have been trained and equipped from outside get their salaries. This is not a difficult thing to do, to make sure they don’t defect, and so that morale is improved. I also think we have every right to expect, if we are helping to underwrite it, that the armed forces answer to a civilian chain of command. Right now, brigades are mainly clan paramilitaries answering only to their own clan commanders, and that is creating a lot of problems in southern Somalia.

In 2009, then-US Secretary of State Clinton undertook to provide military equipment to the Somali armed forces. Was that a useful initiative, or was it premature when the army was so ill-prepared to use the resources? What’s been the result of the US initiative?

It’s not just the US that’s provided support to the Somali armed forces. There are many other external actors and all have had the same experience, of a certain percentage of trainees defecting to Al-Shabaab and a certain amount of weaponry and ammunition ending up in its hands. Many members of the armed forces are also absent because they’re working for private security firms to make more money. So there wasn’t the structure in place for that kind of military assistance to be put to good use. In fairness to the external actors, including the US government, they no doubt were hoping that the training and equipping would occur simultaneously with the building of proper chain of command. That hasn’t happened.

Next year was projected to be a major turning point in Somalia, with a new constitution, and an election in which voters would be asked to support a federal, rather than a centralized state. Now that it’s only a month-and-a-half away, what can we expect for Somalia in 2016?

What we certainly can’t expect is a national referendum on a constitution, or a national election on a new head of state. We’re nowhere near that because the government has made so little progress on those outstanding transitional tasks. What we are likely to see is sustained pressure from external actors for the government to hold some kind of selection or election process; maybe something akin to what they did in 2012, where the parliament combined with representatives from the federal states selects a head of state. The details are critical and are completely undefined at this point.

John L. Hirsch is a Senior Adviser at the International Peace Institute.