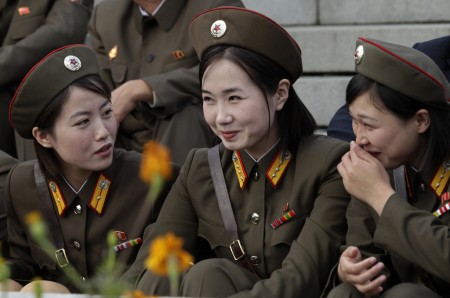 The power structure of the Kim Jong-un regime has turned out to be a single leadership where the country is ruled by one strong man rather than a collective leadership. Instead of having “specific figures” as a regent or a guardian through a decentralization of power, North Korea seems to prefer to support the new supreme leader through “collective consultation.”

The policies designed and implemented during the last three years of Kim Jong-il’s rule were in fact intended as a policy transformation process to prepare preparation for Kim Jong-un’s rule. These policy directions have been maintained since Kim Jong-un came to power. His first public speech on 15 April can be translated as an announcement on limited changes for a “knowledge-based economy.” This established a new period while inheriting the values of Jaju or independence from the Kim Il-sung era and Songun or military first politics from the Kim Jong-il era. In particular, Kim Jong-un emphasized the significance of “peace,” by stating in the speech, “for our party and the Republic’s government that consider powerful state construction and people’s livelihood improvement to be their general goal, peace cannot be more valuable.” Under Kim Jong-un’s rule with the keyword of “knowledge-based economy,” North Korea is expected to place priorities on improving people’s livelihood and will take on more flexible policy decisions from 2013 when the next administrations in South Korea and the United States will be established. As such it is an inevitable option for North Korea to rebuild its economy and attract foreign investment.

Against this backdrop, the administrations in South Korea and the United States should not pressure North Korea but rather wait and respond calmly until the policy lines of the Kim Jong-un regime on economic change and openness are clearer. Above all the first priority should be placed on stable management of North Korean issues, given that many of the participants of the Six-Party Talks will enter into power transition process at the end of 2012.

First, the U.S. administration needs to resume contacts with North Korea in order to implement the Leap Day Deal in which Pyongyang would place a moratorium on missile and nuclear tests, as well as freeze its nuclear programs. If the diplomatic pressure from the international community successfully leads North Korea to give up its nuclear activities and ease tensions, it would create the right environment for the resumption of the Six-Party Talks.

Second, it will be worthwhile establishing contact through high-level channels to develop a clearer picture of what are Kim Jong-un’s intention regarding North Korea’s nuclear activities. In providing new opportunities for the North Korean leadership, a policy shift by Pyongyang may take place.

Third, it is important that the Lee Myung-bak administration reopens channels for inter-Korean talks even at low-level so as to not leave too much of a burden for the next administration. Offering to hold inter-Korean family reunions for the second half of the year 2012 would be a good start.

Fourth, the next administration in South Korea should be committed to establishing a more sustainable North Korean policy that can maintain consistency regardless of any power shift by comprehensively reflecting public opinion during a time when conflict among South Koreans on approaches toward North Korea is becoming worse.

Whoever comes into power in South Korea after the presidential election, the main agenda of inter-Korean relations will be on the next inter-Korean Summit. Kim Jong-un has already expressed his willingness to talk, stating “(we) will go hand in hand with anyone who truly desires the country’s reunification and peaceful prosperity.” If the third inter-Korean Summit can be held in 2013, it would be a significant breakthrough in building confidence between two Koreas and solving the North Korean nuclear crisis as well as making progress toward peaceful coexistence.