The JCPOA represents the art of the possible. Yet its conditions of possibility are also the JCPOA’s Achilles’ heel.

Coercive sanctions are instruments that are intrinsic to conflict. They occur only in the context of a dispute: without a conflict involving differences between opponents, they are inconceivable. More importantly, sanctions cannot be understood properly without taking into consideration the conflict relation they are part of. This is so because the very perception of certain actions as ‘sanctions’ is contingent on an opponent understanding such actions precisely as an instance of coercion; they are not viewed as simply an expression of ‘normal’ economic interaction.

Research demonstrates that political perceptions are a key element in determining the outcome of sanctions conflicts. Contrary to common belief, economic impact is not the main driver in these conflicts. Any impact first gets ‘translated’ politically. Accordingly, it is the sociology of sanctions conflicts that makes the difference. An in-depth analysis shows that the way in which opponents view and understand sanctions politically is decisive in the underlying conflict.

The sanctions conflict over Iran’s nuclear program gave rise to a broad range of interpretations. When early attempts at resolving the issue broke down in 2005, the Iranian government subscribed to a conflict perception that regarded sanctions against the country’s nuclear program as an attack aimed at the continued existence of the Islamic Republic. President Mahmoud Ahmadinejad, a fundamentalist hardliner, relentlessly asserted that the United States (the ‘Great Satan’) was orchestrating a plot to destroy the Islamic Revolution and subjugate the country to its imperialist rule. In consequence, for the Ahmadinejad government an unrestrained nuclear program was the primary vehicle for asserting Iran’s sovereignty. It was promoted as a symbol of the independence of the Islamic Republic. Critics of this stance saw their loyalty to the Islamic Republic questioned, as happened to the Reformist opposition, key parts of which were incarcerated in response to the Green Revolution for alleged complicity in American plots.

When the conservative pragmatist Hassan Rouhani took the Iranian presidency in 2013, his rise to power reflected the growth of a significantly different perception of the conflict over the nuclear program, and of sanctions – one that was in fact closely aligned to the Reformist position. While insisting on Iran’s right to a nuclear program under the Treaty on the Non-Proliferation of Nuclear Weapons (NPT), this view also recognized that other states may have legitimate security concerns regarding some elements of the program. Crucially, empirical data shows that the conflict perception subscribed to by the Rouhani government carefully sought to delimit the nuclear issue from the wider conflict dimension related to the regional order, a dispute perceived to exist primarily with the United States.

Upon closer inspection, the sanctions imposed and the approach of the West in both episodes differed significantly. Ahmadinejad’s rise was preceded by the Bush administration’s notorious public refusal to take any options off the table, including regime change. By implication, in its view, dealing with Iran’s nuclear program was never only about a single issue. Rather, it was part of dealing with the Islamic Republic, the ‘rogue state’, and, in turn, a larger problem of international security. The administration’s one-sided inclination towards negative sanctions and poor, if not absent, coordination with its European allies quickly led to a dead end.  President George W. Bush at one point laconically observed: “we’ve sanctioned ourselves out of influence with Iran … in other words, we don’t have much leverage with the Iranians right now”. [1]

The Obama administration took a different approach to tackling the nuclear issue. From its earliest days in office, it pursued a strategy of dialogue and positive engagement in close coordination with its European allies, complemented by tough sanctions. The new sanctions were closely linked to Iran’s uncontrolled pursuance of a nuclear program, which posed a danger to regional and international security. The approach pursued by the US and the Europeans, supported by Russia and China (together, the P5+1, the five members of the United Nations Security Council and Germany), aimed to present Iran with a choice, plain and simple: either cooperate, create transparency on nuclear activities under the auspices of the IAEA and accept verifiable limitations, or face unprecedented international isolation.

The Nuclear Agreement in its Conflict Context

A detailed analysis demonstrates that the P5+1 and the Rouhani government succeeded because both sides subscribed to a perspective that largely isolated the nuclear issue from the wider conflict between the Islamic Republic and the West. This allowed them to focus on defining the conditions of a legitimate nuclear program and address its repercussions for international security. The sanctions that were lifted remained limited primarily to those that were previously imposed in response to the uncontrolled pursuance of nuclear ambitions. Sanctions imposed in response to other dimensions of the wider conflict between Iran and the West remained in place, such as those targeting Iranian support of terrorism and human rights violations.

The JCPOA introduced a clear conditionality between Iranian compliance and the continued relief from those sanctions that had been imposed in response to the nuclear program. In fact, thanks to what is known as the snapback provision, it only takes one of the parties to the agreement (the P5+1) to raise objections regarding Iranian compliance for a full re-imposition of these extensive UN-backed sanctions. In other words, if there was an issue with the nuclear program, then the best option for dealing with it by any measure would be the snapback provision. Not only does the snapback ensure a straight return to full sanctions, it also enjoys unequivocal global support. Its use would fully isolate Iran.

To be sure, the delimitation of the agreement to the nuclear issue was not perfect, nor was it meant to be. Obviously, some of its authors viewed it as a first big step towards fully re-integrating Iran into the regional security order and the international community. This normative perspective was strong enough to make it into the JCPOA’s preface: “[The parties] anticipate that full implementation of this JCPOA will positively contribute to regional and international peace and security.”

Obviously, not all political groups in Iran fully support the JCPOA, let alone its spirit of wider reconciliation. Fundamentalist hardliners in Iran have never recognized the merits of subscribing to an agreement that puts the nuclear program under the control of the UN. Instead, their reckless pursuance of regional power ambitions puts at risk an historic opportunity for wider reconciliation. The door that the JCPOA opened to this avenue may inexorably close again.

The JCPOA is a tremendously powerful instrument with a very specific purpose: ensuring that Iran’s nuclear program is peaceful. To this end, the JCPOA provides incredible leverage. Throwing away such leverage is not a sane political choice. In an environment in which Iranian machinations continue to have the potential to destabilize the region and threaten its security, new sanctions addressing such activities specifically could be introduced at any time. This is precisely what happened with regard to Iran’s ballistic missile program.

The nuclear agreement came about thanks to the careful isolation of the underlying issue from the wider conflict, and its support by political forces that were interested in resolving this issue. Neither the move of isolating the issue, nor the aim of reaching an agreement went uncontested. Hardliners on both sides allege it to be a sell-out to the other in the greater struggle. This vision of the nuclear issue as part of the wider conflict all too quickly denies the legitimacy of either side’s concerns from the perspective of the other. For a situation of this kind, the sociological conflict analysis shows that the prospects for reaching an agreement are negligible. Moreover, tough sanctions tend to become ‘translated’ in a way that re-affirms the underlying wider conflict view. It remains highly questionable whether exerting renewed pressure by re-imposing sanctions will invigorate Iranian readiness to negotiate a grand bargain on the wider conflict, given the Islamic Republic’s sensitive domestic political environment. The likely outcome of exiting the JCPOA and linking the nuclear issue to the wider conflict is deadlock or, worse, an escalation spiral.

The JCPOA represents the art of the possible in relation to controlling Iran’s nuclear program. Exiting the JCPOA gives away the great leverage of its compliance regime and recklessly risks conflict escalation. A ‘snapback’ would isolate Iran. The US exit from the JCPOA thoroughly isolates one of the agreement’s principal architects when it comes to dealing with this issue.

This analysis is based on past research on the sociology of international sanctions conflicts that was conducted at the Center for Security Studies, ETH Zurich. The research has been published as part of Routledge’s acclaimed New International Relations series. You can find the publication here. 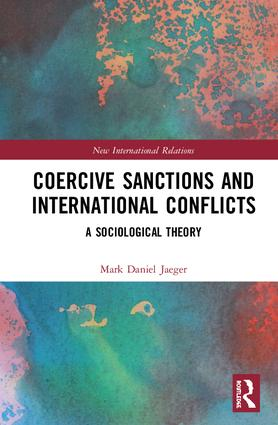 “This is the most convincing theory to date for the analysis of international sanctions and therefore exceedingly important for practically managing some of the most explosive conflicts on the current policy agenda.”
– Ole Wæver, University of Copenhagen

Mark Daniel Jaeger is a Researcher at the Centre for Advanced Security Theory, University of Copenhagen.