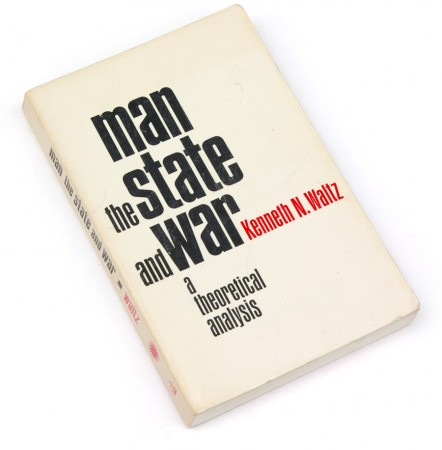 Man, the State and War: an IR classic. Image: Bookworship.com

In June of 2009, the journal International Relations devoted an entire issue (in two parts) to a man it described as “The King of Thought.” The occasion was the 30th anniversary of the publication of Theory of International Politics and the 50th anniversary of Man, the State and War. As Ken Booth wrote in the issue’s introductory essay: “…the justification for a project to celebrate and re-examine these classic books needs little elaboration.  Nor is the stature of their author in any doubt, as is testified by the following recent endorsements by leading figures in the field: ‘Kenneth Waltz is the most important international relations theorist of the past half century’ (John J Mearsheimer); ‘Kenneth Waltz is the pre-eminent international relations theorist of the post-World War II era’ (Stephen M Walt); and ‘Kenneth N Waltz is the pre-eminent theorist of international politics of his generation’ (Robert O Keohane).”  “Intellectually speaking,”  Booth continues, “we are all Waltz’s subjects, whether we be loyal disciples, friendly critics, or rebellious opponents: the discipline defines itself in relation to the authority of his work.”