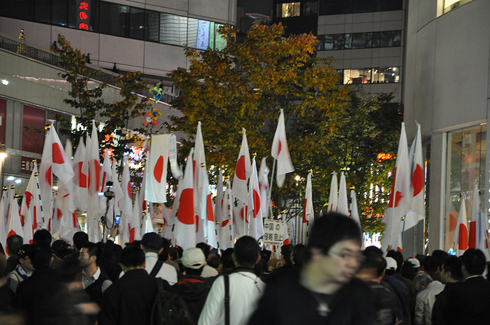 TOKYO – Japan has been in the news lately, owing to its dispute with China over six square kilometers of barren islets in the East China Sea that Japan calls the Senkakus and China calls the Diaoyu Islands. The rival claims date back to the late nineteenth century, but the recent flare-up, which led to widespread anti-Japanese demonstrations in China, started in September when Japan’s government purchased three of the tiny islets from their private Japanese owner.

Prime Minister Yoshihiko Noda has said that he decided to purchase the islands for the Japanese central government to prevent Tokyo Governor Shintaro Ishihara from purchasing them with municipal funds. Ishihara, who has since resigned from office to launch a new political party, is well known for nationalist provocation, and Noda feared that he would try to occupy the islands or find other ways to use them to provoke China and whip up popular support in Japan. Top Chinese officials, however, did not accept Noda’s explanation, and interpreted the purchase as proof that Japan is trying to disrupt the status quo.

In May 1972, when the United States returned the Okinawa Prefecture to Japan, the transfer included the Senkaku Islands, which the US had administered from Okinawa. A few months later, when China and Japan normalized their post-World War II relations, Japanese Prime Minister Kakuei Tanaka asked Chinese Premier Zhou Enlai about the Senkakus, and was told that rather than let the dispute delay normalization, the issue should be left for future generations.

So both countries maintained their claims to sovereignty. Though Japan had administrative control, Chinese ships would occasionally enter Japanese waters to assert their legal position. For China, this was the status quo that Japan upended in September. In Beijing recently, Chinese analysts told me that they believe that Japan is entering a period of right-wing militaristic nationalism, and that purchasing the islands was a deliberate effort to begin eroding the post-WWII settlement.

While Chinese rhetoric is overheated, there is certainly a rightward shift in mood in Japan, though it would be difficult to describe it as militaristic. A large group of students at Waseda University recently were polled on their attitudes toward the military. While a significant number expressed a desire for Japan to improve its ability to defend itself, an overwhelming majority rejected the idea of developing nuclear arms and supported continued reliance on the US-Japan Security Treaty. As one young professional told me, “we are interested in conservative nationalism, not militaristic nationalism. No one wants to return to the 1930’s.”

And, of course, Japan’s Self Defense Forces are professional and under full civilian control.

Japan faces parliamentary elections in the near future, by August 2013 at the latest, but perhaps as early as the start of the year. According to public-opinion polls, the governing Democratic Party of Japan, which came to power in 2009, is likely to be replaced by the Liberal Democratic Party, whose president, Shinzo Abe, would become prime minister – a position he has already held.

Japanese politics, it seems, is showing signs of two decades of low economic growth, which has led to fiscal problems and a more inward-looking attitude among younger people. Undergraduate enrollment of Japanese students in US universities has fallen by more than 50% since 2000.

Thirty years ago, Harvard professor Ezra Vogel published Japan as Number 1: Lessons for America, a book that celebrated Japan’s manufacturing-fueled rise to become the world’s second-largest economy. Recently, Vogel has described Japan’s political system as “an absolute mess,” with prime ministers replaced almost every year and the youngest generation’s expectations sapped by years of deflation. Yoichi Funabashi, former Editor-in-Chief of the newspaper Asahi Shimbun, also is worried: “There’s a sense in Japan that we are unprepared to be a tough, competitive player in this global world.”

Despite these problems, Japan still has remarkable strengths. Although China surpassed Japan as the world’s second-largest economy two years ago, Japan is a comfortable society with a much higher per capita income. It has impressive universities and a high education level, well- managed global companies, and a strong work ethic. It is a society that has reinvented itself twice in less than 200 years – in the nineteenth-century Meiji Restoration and after defeat in 1945. Some analysts hoped that last year’s earthquake, tsunami, and nuclear catastrophe would spark a third effort at national reinvention, but that has not yet occurred.

Many younger Japanese have told me that they are “fed up” with stagnation and drift. When asked about the rightward trend in politics, some young Diet (parliament) members said they hoped that it might produce a realignment among political parties that would lead to a more stable and effective national government. If a moderate nationalism is harnessed to the yoke of political reform, the results could be good for Japan – and for the rest of the world.

But if Japan’s deepening nationalist mood leads to symbolic and populist positions that win votes at home but antagonize its neighbors, both Japan and the world will be worse off. What happens in Japanese politics over the coming months will ripple far beyond the country’s shores.

Joseph Nye is a professor at Harvard University and the author of The Future of Power.

China-Japan Tensions Over the Diaoyu/Senkaku Islands

Japan, China, and the Tide of Nationalism