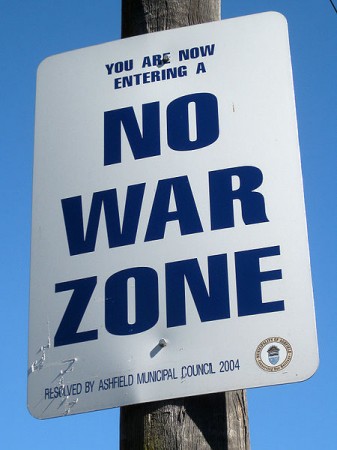 In a recent open letter Costa Rica President Oscar Arias Sanchez wrote to his Uruguayan counterpart Jose ‘Pepe’ Mujica to ask him to abolish the Uruguayan army. Sanchez’s argument is based on the concept of ‘helplessness’.

This theory argues that it is better to have no army at all than a weak army that will be destroyed by any kind of foreign army anyway. Sanchez states that “Uruguay can not win an arms race against Brazil, Colombia, Argentina, Chile and Venezuela. In the present circumstances, helplessness is a better national security policy for your people, than a military apparatus below that of your neighbors.” Sanchez also mentions that “the armed forces have been the source of the most thankless collective memory. It was the military boot that trampled human rights in our region.”

So the army, for small states, is dangerous internally and not useful externally.

But having no army doesn’t mean having no security forces at all. Internal security, law enforcement and border security are the responsibility of the police force.

In the case of Costa Rica, this doctrine has proven to be successful. Since the country decided to abolish the army, it has lived in peace and relative prosperity, despite the fact that it is surrounded by ‘turbulent’ neighbors like Nicaragua, Panama – that later abolished its army too – or El Salvador.

So is the doctrine of helplessness really useful in preventing conflict? For small states like Costa Rica or other small states that do not have an army like Iceland, Liechtenstein, Monaco or Mauritius, I believe this concept is really a powerful tool in the hands of the ruling regimes. Instead of investing money in a useless army that will have weak or no defensive potential at all, governments can invest money in measures that will help to stabilize the country and the region, like education or development projects.

Having no army, argues Sanchez, is also an advantage when the regional peace is threatened by military actors. It helps the demilitarized country to be “perceived as allies of all parties to the conflict,” or at least it helps to develop a “non-threatening” image vis-à-vis of the rest of the region.

But could we imagine other powerful regimes like Brazil or Germany without an army?

I think it would be possible in an idealistic world. In a perfect democratic system, the government is accountable to the population and the internal security is being assured by the police forces and that is enough to ensure stability. The ultimate condition of the helplessness doctrine is that every country respects the sovereignty of the other countries.

The only problem is that we are not living in a perfect world.

Powerful countries need to have an army to protect their national interest. They need to show to the rest of the international community that they are not only competitive economically, but also militarily. And the rest of the world needs to have someone they can rely on if they are experiencing insecurity. Thanks to all the soldiers involved in the UN Peace Missions, some powerful actors are still taking care of the international security.

But the small states are fully aware that they cannot compete militarily. They can only compete economically and that is why they have a bigger interests in the helplessness doctrine than powerful states.

That is why small states can and need to lead the way toward demilitarization and I am convinced that it would be in the interest of many small states, like Singapore, Nepal or Slovenia for example, to follow the way opened by Costa Rica.

This will grant them with more financial resources, will strengthen their peaceful image abroad and will put informal pressure on bigger states to demilitarize or to at least reduce the size of their army. Small and demilitarized states will also be able to rely on the international security system to prevent any kind of aggression toward them.

So for the sake of world peace, we can only hope that helplessness is, indeed, contagious to the international community.

More information on demilitarization and Costa Rica are available in our digital library.

One Response to “Is Helplessness Contagious?”