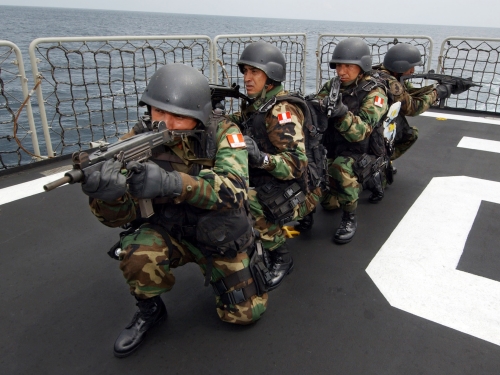 This article was originally published by IPI Global Observatory on 11 August 2015.

In late July, as millions of Peruvians prepared to celebrate their country’s Independence Day, government forces descended upon “Sector 5,” a guerrilla installment in the heart of the coca-producing region of Junín. What they found there was stunning: a “production camp” of 39 Asháninka Indians, most of them children, living in apparent captivity as prisoners of the Maoist militants Shining Path. Some of the adults had been living in the camp for 30 years. According to an internal communiqué from the Peruvian national police, the captives had been forced to work as agricultural laborers and the women were expected to breed and raise a new generation of militants.

The operation was the first of several rescue missions carried out by Peruvian security forces in recent days and weeks. The latest count puts the total number of rescued hostages at over 50. According to counterterrorism police chief José Baella Malca, there could be as many as 180 children still in captivity in the zone. The recent discoveries teach us a good deal not just about a guerrilla group long believed to have been defeated, but about Latin American peace processes more generally.

To begin with, Shining Path had never been defeated; only weakened. The biggest blow to the organization came in 1992, when Peruvian counterterrorism police captured its supreme leader, Abimael Guzmán, following a raid on his Lima safe house. The years following the rebel kingpin’s arrest included failed peace talks, high levels of desertion from the rebel army, the arrest of most guerrilla leaders, and intense in-fighting that led to a party split in the late 1990s, but never defeat.

Members of Shining Path’s militarized camp retreated to the coca-producing zone in which Sector 5 is located. Despite major setbacks, including the 2012 capture of their new commander, Florindo Flores Hala, a.k.a. “Comrade Artemio,” the militarized faction never abandoned the armed struggle. Currently, the guerrilla group, which according to experts includes no more than 200 active combatants, is being led by two brothers, Víctor and Jorge Quispe Palomino, who have been with the movement since the 1980s. The fact that some of the Asháninka rescued last week had been in captivity for 30 years—well before Guzmán’s capture—speaks to the insurgents’ endurance.

For Col. Oscar Arriola Delgado, head of the Peru national police force’s Research Division of Metropolitan Terrorism, Shining Path, although depleted, is just as dangerous as ever.

“In both [the militarized and non-militarized] factions, nothing has changed,” Arriola told me. “The hostages in [Sector 5] had been in captivity for more than 30 years—and terrorism only began 35 years ago—so [Shining Path] is absolutely still a threat.”

For or Against Indigenous Peasants?

Perhaps the most perplexing thing about last week’s revelation is that the rescued Asháninka appear to have been living in total captivity under Shining Path. This has left many observers wondering how an insurgency that claims to be fighting on behalf of the peasant masses can treat those same masses with such disregard. This contradiction, however, is nothing new.

When Shining Path launched its insurgency in the Andean highland department of Ayacucho in 1980, it enjoyed initial support from the Quechua-speaking peasantry. Throughout the countryside, the rebels submitted abusive authorities, perpetrators of domestic violence, alcoholics, and cattle-rustlers to ad-hoc “popular trials.” Due in large part to these measures, some indigenous peasants pledged early support to the insurgents. However, as the war waged on, the rebels became more and more violent, massacring entire communities and killing their defectors.

By 1983, Andean peasants had formed their own civilian counterinsurgency militias to defend their communities against the guerrillas. This peasant counterinsurgency quickly spread to the lowlands, where the Asháninka fought off the rebels to great success. In response to this unanticipated and pervasive civilian resistance, Shining Path bands raided rural communities, killing many detractors and kidnapping children and adolescents to build up their guerrilla ranks. Some of these kidnapped children would spend their entire lives in guerrilla camps like Sector 5.

Given Shining Path’s complicated history with Peru’s indigenous peasantry, and its history of kidnapping as a strategy of building up its guerrilla army, July’s discovery of production camps is not so surprising after all. Nor should we be surprised if security forces find more camps in the weeks and months to come.

For most casual observers and some state officials, Shining Path is nothing more than a band of drug-trafficking misfits. For some, the connection between its militarized faction and the illicit drug trade is evidence of the “FARC-ization” of the Peruvian Maoists, referring to the way in which Revolutionary Armed Forces of Colombia (FARC) has supposedly abandoned its ideological roots to focus on that that country’s lucrative narcotics trade.

While it is true that Shining Path’s militarized faction operates primarily in the coca-producing jungles of Peru, claims that it is simply a drug cartel masquerading as a guerrilla army appear unfounded. There is, to be sure, persuasive evidence supporting the claim that the faction uses money from narco-trafficking to fund its operations. However, those operations remain of an insurgent nature.

Last week’s rescue operations revealed that, in addition to performing agricultural labor, the children found in Sector 5 received ideological and combat training. An organization strictly interested in profiting from the drug trade would have no interest in—or need for—educating children in Maoist doctrine. The primary objective of these camps, then, was not to support Shining Path’s illicit activities, but to raise a new generation of revolutionaries to continue its “prolonged people’s war.”

Shining Path is, then, primarily an insurgent group. If the militarized faction is indeed involved in the drug trafficking business, it is a secondary concern. The principal objective is, and has always been, to wage Maoist insurgency.

This is an important distinction to make, not just in the Peruvian case, but also with respect to other insurgent groups believed to have connections to the narcotics trade. As mentioned, critics of the FARC have also used evidence of the Colombian guerrillas’ drug ties to discredit it. Yet FARC are likewise first and foremost insurgents. However contradictory, however deplorable their actions may be—kidnappings, illicit activities, violence against the very population they claim to support—the rebels justify them as necessary steps toward an end game of revolution. To dismiss them as bandits or criminals misses the point entirely.

Given that these groups see themselves as engaged in a prolonged revolutionary struggle, it is difficult to imagine a scenario in which they would abandon that struggle completely. Shining Path has been active, in various forms, for 45 years; the FARC for over 50. Both groups have experienced serious setbacks over the years: territorial losses, desertion, frustrated peace talks, the loss of rebel leaders, and more. Yet, both groups remain militarized, and neither has shown signs of defeat.

This is why the current peace talks in Havana between the FARC and the Colombian government are so important. If they result in the FARC’s complete demilitarization, they may offer a model for how Peru can deal with Shining Path. If, however, the negotiations break down (as they have in the past), they point to a long and difficult road to peace for both countries.

Miguel La Serna is Associate Professor of History at the University of North Carolina, Chapel Hill and author of The Corner of the Living: Ayacucho on the Eve of the Shining Path Insurgency.