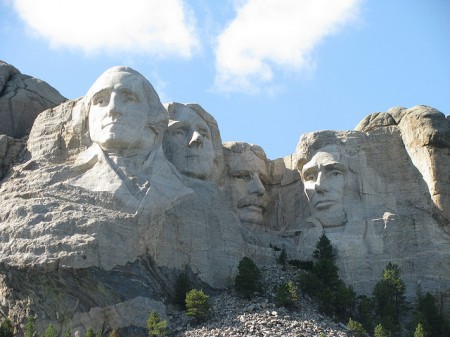 To understand the United States’ role in the world, familiarity with the various frames that decision makers in Washington rely on when formulating foreign policy is helpful. Most statecraft blends these, kind of like a color wheel. The basic contours, however, personified by four giants of American history, are as follows:

Hamiltonianism maintains that the US should pursue a realist foreign policy, balancing interests, especially material ones, and fundamentally seeks to promote an expansionist agenda. Hamiltonians support a robust national security establishment, a strong dollar policy and a muscular industrial base; in effect the US from WWI to the Great Recession. Domestically, these are the establishment Republicans exemplified by figures such as father George H. W. Bush.

Wilsonianism also subscribes to the furtherance of the Pax Americana. But whereas Hamiltonians favor material interests, Wilsonians emphasize the normative, touchy-feely moral aspects of foreign policymaking. Wilsonians are frequently labeled idealists, like to set up international institutions, are bleeding-heart humanitarian interventionists, prefer to co-opt other states rather than impose their will on them, and ultimately seek to consolidate a global society defined by liberal American values. Recently, Presidents Obama (Libya), more cynically George W. Bush (Iraq after WMD failed to materialize) and Clinton (Bosnia) have all incorporated elements of Wilsonianism in their prosecution of US foreign affairs.

Jeffersonianism boils down to super-sizing pre-industrial Switzerland; trade but focus on the domestic, set a – but don’t strive to lead by a – moral example, keep the national security state at a minimum (the ideal is none whatsoever), don’t pick fights abroad with the army you don’t have. The hitch with Jeffersonianism is that it’s hard to square with America’s post-WWII superpower status and easily derided back home as pusillanimous.

Jacksonianism is Palinesque populist and like Jeffersonianism isolationist at heart. Jacksonians are equally suspicious of the moneyed, power-centralizing Hamiltonians. But they depart from the Jeffersonians when it comes to the use of force. A Jeffersonian will almost always turn the other cheek. A Jacksonian is almost always up for a fight against an enemy he perceives as intrinsically menacing the national interest. And once blood and treasure are committed, surrender, or for that matter showing mercy, is no longer an option. Chest thumping is welcome. Both Jacksonians and Hamiltonians, but the former more forcefully so, tend to shun international institutions and view them as constraints on US freedom of action. The knee-jerk, outraged and ultimately fabulously expensive neoconservatives’ reaction to 9/11 under George W. Bush was Jacksonian through and through.

So, what’s President Obama? My guess is something approximating a longing Jeffersonian with a Wilsonian bent operating in a Hamiltonian world inexorably in relative decline.

For more information on US foreign policy, please see our extensive resources in our Digital Library.