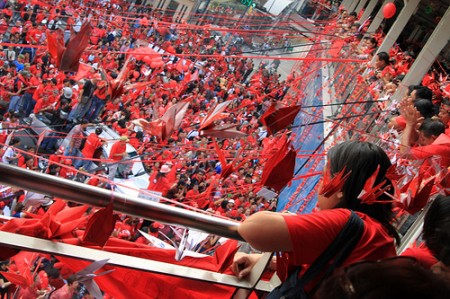 Thai parties are gearing up for general elections as Prime Minister Abhisit Vejjajiva is expected to dissolve the House of Representatives shortly. His Democrat Party came to power through a parliamentary vote, after the previous government was toppled. The upcoming elections will now put the government’s mandate to a popular test. So far so good. It is very unlikely though that the five-year-old political crisis will end with the formation of a new government.

Thailand’s deep political divide is driven by the underlying monarchical succession – the first of its kind since 1946. The system on which the Thai society is built is in flux, leaving everyone struggling to be in a better position.

The Democrat Party has possibly gained some popularity among ordinary Thais, but all in all it remains an elite movement rooted in Bangkok’s establishment. Thus there’s a good chance that the Pheu Thai Party – the de facto party of deposed Prime Minister Thaksin Shinawatra – receives most votes in the poll. The Democrat Party is desperately trying to avoid this. It has successfully pushed for changes to the electoral rules which will, or so it hopes, secure it more seats in the upcoming elections.

Potentially more dangerous is the military’s resolute opposition to the return of a Thaksin-affiliated populist government. It fears that its role could be drastically reduced under a Pheu Thai-led government, and that the military might be held accountable for the suppression of the 2009 and 2010 mass protests. Some even see the renewed outbreak of violence at the Thai-Cambodian border as being whipped up by the army in order to precipitate a sense of crisis and cancel the election altogether.

The formation of the government is likely to be contentious. If the incumbent government coalition stays in power, the red shirts (pro-Thaksin) will see this as proof that the Democrats are conspiring with the military and might mobilize mass protests. Prospects of a government led by the Phue Thai Party, on the other hand, might bring the yellow shirts back the street or even lead to yet another military coup.

Hopefully these fears turn out to be exaggerated. But with the underlying monarchical transition, stakes are unusually high and the loser will find it hard to accept that the winner takes it all.