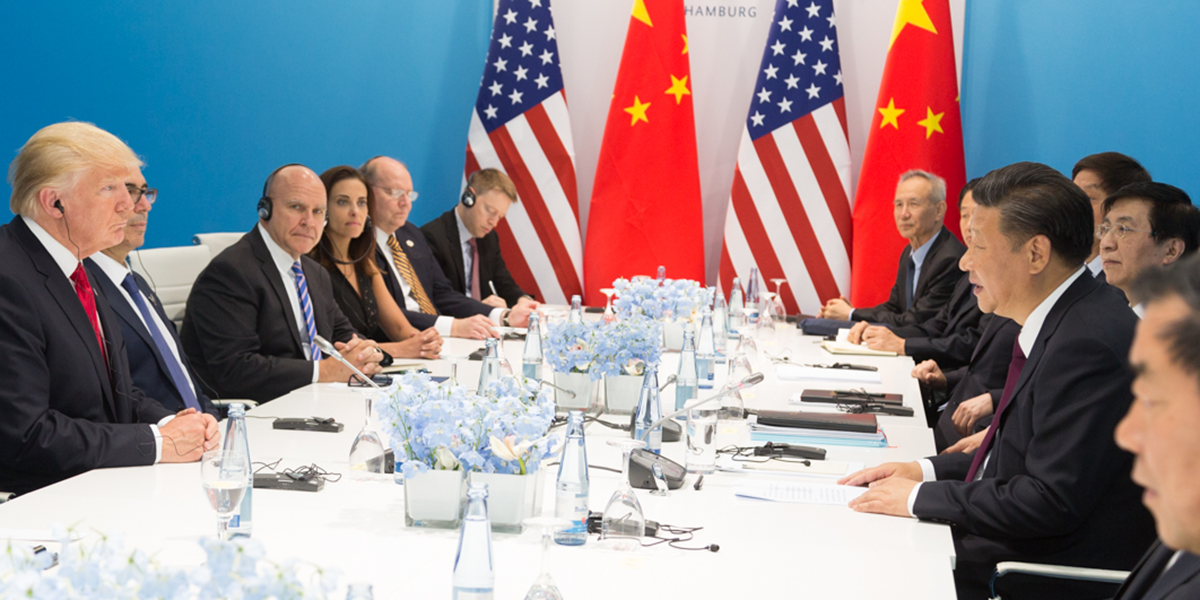 Image courtesy of the White House/Flickr.

US-China relations are at a new low-point following the global spread of the coronavirus, which first emerged in the Chinese city of Wuhan in December 2019. The pandemic has exacerbated tensions in what was already a fragile relationship, plagued by disputes on issues related to the South China Sea, Taiwan, trade, and 5G technology. Nuclear weapons, however, were not featured as a central element of the US-China confrontation, at least not at same level as other issues of contention, but this is likely to change. A recent call for China to drastically increase its nuclear arsenal published in the nationalistic Chinese newspaper the Global Times has revived a domestic debate on Chinese nuclear deterrence, highlighting concerns over perceived US hostile behavior.

The significant impact of the corona crisis on US-China relations could have implications for the nuclear relationship between the two powers, at a time when no real mechanisms exist to manage the nuclear competition. Indeed, a re-emergence of hawkish Chinese views on nuclear weapons is taking place alongside increased frustration with Washington’s insistence that China be included in future arms control initiatives. New START (Strategic Arms Reduction Treaty), the last remaining arms control treaty between the US and Russia, is set to expire in February 2021. While it could be extended for up to five years by mutual agreement, the US administration has so far refused to agree to such an extension, pointing instead to the need to either bring China into New START or into a new nuclear arms control agreement. Including China in nuclear arms control initiatives is an important goal and should be pursued in good faith. It should not, however, come at the expense of abandoning the only remaining legal restraint on the world’s two largest nuclear weapons arsenals.

A Call for China’s Nuclear Upgrade

Disagreements between the US and China over the concept of trilateral arms control are embedded within a larger framework of increasing tensions. The corona crisis has further worsened relations, with the US and China trading blame over the handling of the pandemic as well as its origins. Amid these increasingly strained Sino-American relations, a Chinese nationalistic newspaper, the Global Times, published an article calling for China to expand its nuclear arsenal in order “to deter the US from its ambition to contain China through military means and dispel thoughts of irrational military action by US warmongers”.

The article, which cites several high-profile military experts, also asserts that China “should have nuclear deterrence capabilities appropriate to its position and strategic interests”. Such calls for increasing China’s nuclear stockpile are not new and receive significant public support. While the article does not reflect official Chinese policy, with the Ministry of Foreign Affairs describing it as a “personal view”, its publication in a newspaper under the control of the Chinese Communist Party in the current corona context is not innocuous and has certainly not gone unnoticed worldwide, leading to speculation regarding its intent. Some of the sources cited in the article are known hardliners, whose views are not shared by all experts in China. Some experts have in fact challenged the article, noting the risks to Beijing’s national interests and credibility should China seriously expand its nuclear arsenal when all other nuclear-weapon states under the Non-Proliferation Treaty (NPT) are reducing theirs. While the impact of the Global Times article should not be overstated, it does highlight how US policies, rhetoric, and actions toward China are increasingly perceived in China as aggressive, prompting the need for response including in the nuclear realm. It also reinforces the Chinese view that repeated US calls for China to join arms control efforts are not genuine, but a way to constrain Chinese capabilities to the US’ advantage.

The Trump administration has been exhorting China to join arms control efforts on a regular basis since the end of 2018, mostly through public statements by President Trump, Secretary of State Mike Pompeo or other State Department officials. No clear proposal or initiative has yet been put forward which would articulate how the US envisions China’s participation in arms control initiatives. The US administration’s insistence on making the extension of New START conditional on progress on a trilateral agreement is instead perceived by many as an excuse to let the agreement expire. The US and Russia still jointly hold more than 90 percent  of the world’s nuclear warheads, with around 4,000 warheads each in their military stockpiles, whereas China is believed to possess around 300 nuclear warheads. Citing this large capabilities gap, Chinese officials have consistently and repeatedly rejected US calls for trilateral arms control.

The official Chinese line remains that the US and Russia need to make further cuts to their arsenals to lower them to the level of other nuclear-weapon states, thereby creating the conditions for other countries to join disarmament efforts. While this has often been misinterpreted as an excuse or disinterest in arms control as a whole, China has actually taken part in several international arms control initiatives since joining the NPT in 1992. China is a party to the 2015 Iran nuclear agreement, which it helped negotiate. In 2019, it took the lead in reviving the P5 process, a dedicated forum for the five recognized nuclear-weapon states under the NPT, and has notably coordinated work on a common nuclear glossary. Given important differences between Chinese and English when it comes to defining terminology and concepts, China’s work on coordinating a glossary of nuclear terms in English, Chinese, Russian, and French is a notable step toward improving communication and reducing the risk of misunderstandings.

Strategic arms control, however, is a different matter. “Nuclear arms reduction negotiations”, which is how Chinese officials refer to it, have only taken place between the US and Russia on limiting and reducing nuclear warheads and strategic delivery vehicles. Given the significant differences in warhead numbers, Beijing still sees strategic arms control as the sole prerogative of the US and Russia. Future arms control agreements will need to deviate from those of the past in order to include new technological developments. Yet, moving from a bilateral to a trilateral or multilateral agreement would need to take differences in arsenal sizes into account without creating different statuses between parties. This would require consideration of new counting rules, verification methods and many other new elements, which would take time but is neither unreasonable nor impossible.

However, China has little incentive to participate in such discussions at this time. Chinese officials have long been skeptical of transparency measures, which would be an inevitable and necessary feature of any arms control agreement. Moreover, the US refuses to consider limits on missile defense capabilities and refuses to accept mutual vulnerability with China. The latter precludes strategic arms control talks, since, from a Chinese perspective, it confirms that the US is not pursuing strategic stability but rather a position of dominance, implying an invulnerability to a potential Chinese retaliatory strike. In the absence of a bilateral strategic dialogue between the US and China, the last of which took place in November 2018, progress on reaching an understanding on these fundamental issues will remain limited. Establishing a regular and dedicated dialogue which could address issues related to nuclear risk, doctrines and emerging technologies, among other things, would be a necessary first step to bridge one of the many gaps that exist between the US and China and, crucially, to start building confidence.

Deteriorating relations between the US and China on a range of issues complicate the prospect of starting such a bilateral dialogue, let alone arms control talks. Yet, arms control negotiations have historically taken place at periods of high tension. The current environment should not, therefore, be dismissed as having a completely adverse effect on dialogue. The economic downturn due to the corona crisis is also expected to have an effect on global defense spending, which, in turn, could contribute to an environment more conducive to arms control negotiations. Against the backdrop of a looming global recession and heightened tensions, the US and China may be more disposed to engage in talks aimed at managing a costly arms race.