Colombia – A Long Way to Peace? 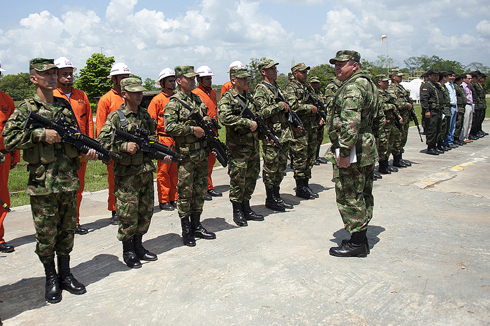 In the early hours of New Year’s Day, the Colombian Armed Forces launched [es] an air strike on a Revolutionary Armed Forces of Colombia (FARC) camp located near Chigorodó, northwestern Colombia. The air strike was called after Elda Ramírez (aka ‘Mayerly’), considered a senior member of the FARC hierarchy, called a man who she believed was a drug dealer interested in buying cocaine. Instead, the dealer turned out to be an undercover police officer, and the consequent air attack claimed the lives of fourteen guerrilla fighters belonging to the FARC’s fifth front.

The air strike also occurred against the backdrop of negotiations between the FARC and Colombian government that have been ongoing since September 2012. To support the peace talks, the FARC announced a ceasefire on November 20. However, Colombia’s armed forces have continued military operations against the organization. On January 20, FARC announced that it had suspended the ceasefire and instead proposed a bilateral truce.

The Colombian government’s attack and the broken ceasefire [es] provoked a variety of response from the country’s bloggers. For instance, a blogger at Colombia Opina celebrated [es] the bombings and explains why the FARC’s fifth front was so dangerous:

FARC’s 5th front was some kind of school for terrorists. From Efraín Guzmán [es] to Iván Márquez, and to the now demobilized “Karina” to the still armed rebel [Jhover Man Sánchez Arroyave] aka “Manteco” have all belonged to [this front], an old, belligerent guerrilla structure, which in the early hours of December 31 received another blow by the Colombian Air Forces in ‘Operation Fortune’, a bombing which left at least 14 rebels dead and brings back the hope for security of the inhabitants in the strategic area known as the Banana Axis, which borders a corridor of the Abibe Mountains and crosses through Riosucio river to the middle of Atrato river.

In contrast, Camilo Raigozo criticizes [es] President Santos’ ‘happiness’ with the killing of the guerrilla fighters:

Horacio Duque, on Tercera Información, wonders [es] if the unilateral ceasefire by FARC has worked:

It seems, based on the data delivered by the experts who closely follow these combat operations, that in the first day the success [of the ceasefire] has been resounding. Combat operations and clashes went from 190 to 26 monthly, 23 of them with origin in groups not related to the talks in Cuba (…) Even oil and mining companies have reported a less hostile environment.

Fernando Dorado writes [es] about the convenience of extending the ceasefire:

If the ceasefire period is kept or extended, beyond the holiday season, FARC guerrillas would be putting all the pressure on the government in order to agree to a bilateral ceasefire, which would make the peace process more convincing.

It seems that the reluctance of the Colombian government to respect the FARC ceasefire is intended to weaken [es] the group both militarily and strategically. In doing so, Bogota anticipate that the FARC will have less space to make demands during the peace talks. The effectiveness of this strategy will likely be determined over the course of 2013, especially as the November deadline for brokering a peace agreement approaches.

One Response to “Colombia – A Long Way to Peace?”