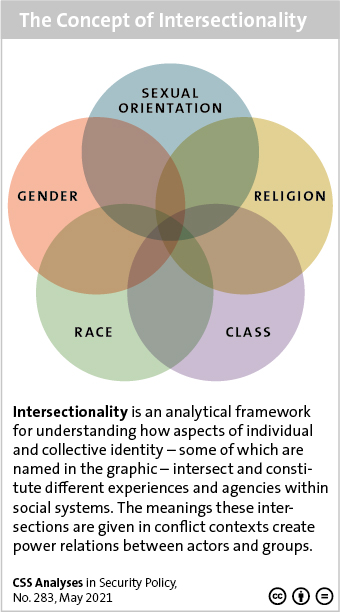 This week’s featured graphic shows the concept of intersectionality. To find out more on religion and gender in conflict, read Cora Alder’s CSS Analyses in Security Policy here.

Image courtesy of UK Foreign and Commonwealth Office/Flickr. (CC BY 2.0)

This article was originally published by the Council on Foreign Relations on 27 March 2020.

This blog post is part of the Women and Foreign Policy program’s interview series on Gender Equality in Foreign Policy, featuring global and U.S. officials leading initiatives to promote gender equality in the defense, development, and diplomatic sectors. This interview is with Joanna Roper, the United Kingdom Foreign and Commonwealth Office’s first Special Envoy for Gender Equality.

END_OF_DOCUMENT_TOKEN_TO_BE_REPLACED

This article was originally published by Political Violence @ a Glance on 24 January 2017.

In September, US Senator Barbara Boxer introduced legislation calling for the active recruitment of women into global military and police forces because, as she notes, “when women are deployed… there are fewer allegations of sexual abuse and exploitation.” This follows a string of proposals from government officials and international organizations – as well as findings from academics – suggesting that integrating women into armed groups mitigates conflict-related sexual violence. For example, United Nations Security Council Resolution 1325 explicitly calls for gender mainstreaming in armed institutions as a solution for sexual abuse and violence against women. Some academic research supports this idea, concluding that groups may commit fewer rapes when they have high proportions of female combatants.

This argument’s core logic, however, makes a series of flawed assumptions about gender and sexual violence. First, and perhaps most significantly, it assumes that female combatants are innately less violent than their male counterparts – it suggests women’s passivity should tame otherwise violent groups. Yet women’s wartime brutality is well documented and, in many cases, female combatants also commit rape. Indeed, sexual violence persists in many groups despite female integration: high rates of ‘blue on blue’ assault in the US military and testimony from female rebels in Nepal, Colombia, and other conflicts illustrate that many female-inclusive groups abuse their own cadre in addition to civilians.

END_OF_DOCUMENT_TOKEN_TO_BE_REPLACED

This article was originally published by the Danish Institute for International Studies (DIIS) on 4 January 2017.

Deploying more female soldiers in peacekeeping missions will not in itself prevent sexual exploitation and abuse. Strengthening gender training and investigative capacities are small, yet feasible steps forward.

According to United Nations Security Council Resolution 1325 on Women, Peace and Security (UNSCR 1325), increasing the number of female peacekeepers will reduce sexual exploitation and abuse (SEA) in peace operations. However, this does not seem to be the case in the Democratic Republic of Congo (DRC), where UN peacekeepers from South Africa have been more involved in SEA than peacekeepers from other nations, even though the South African National Defence Force (SANDF) has the highest number of female peacekeepers deployed in the DRC. In the United Nations Organization Stabilization Mission in the Democratic Republic of the Congo (MONUSCO), 243 of the 1351 SANDF troops deployed (18%) are women. However, changing a military culture that tacitly accepts SEA as a part of everyday life in the camps requires more profound measures than simply deploying more women.