What Are Security Professionals Thinking?

From Monday the 19th to Friday the 23rd of March, our partners at the Security and Defense Agenda (SDA) organized Security Jam 2012. Over the course of these five days, thousands of experts, representatives of national governments and armed forces, international institutions, NGOs, think-tanks, industry, academia and members of the media took part in a massive online brainstorming session focused on finding real solutions to global security issues. The numbers speak for themselves: during the event, there were 17,000 logins from some 3,000 participants and 50 VIPs spanning 115 countries.

The SDA gave its partner institutions the opportunity to submit some short questions that were published as online polls during the event.  Especially considering the high profile of some of the participants, it is interesting to see what security professionals are thinking about some of the most pressing issues on the security agenda. Below we present the results of five of the most interesting polls. END_OF_DOCUMENT_TOKEN_TO_BE_REPLACED CAMBRIDGE – Two years ago, a piece of faulty computer code infected Iran’s nuclear program and destroyed many of the centrifuges used to enrich uranium. Some observers declared this apparent sabotage to be the harbinger of a new form of warfare, and United States Secretary of Defense Leon Panetta has warned Americans of the danger of a “cyber Pearl Harbor” attack on the US. But what do we really know about cyber conflict?

The cyber domain of computers and related electronic activities is a complex man-made environment, and human adversaries are purposeful and intelligent. Mountains and oceans are hard to move, but portions of cyberspace can be turned on and off by throwing a switch. It is far cheaper and quicker to move electrons across the globe than to move large ships long distances.

The costs of developing those vessels – multiple carrier task forces and submarine fleets – create enormous barriers to entry, enabling US naval dominance. But the barriers to entry in the cyber domain are so low that non-state actors and small states can play a significant role at low cost. END_OF_DOCUMENT_TOKEN_TO_BE_REPLACED

Smartphones for the Battlefield? 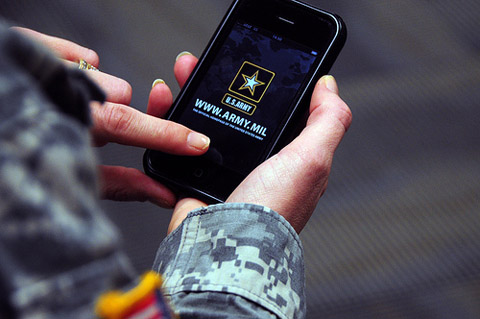 Soon used to control a swarm of small deployed UAVs? Photo: US Army/flickr

What do smoke detectors, invisible orthodontic braces and infrared ear thermometers have in common? They are all NASA spin-offs; which means that they are consumer goods that in one way or another benefited from technologies developed through NASA funding, research, licensing, facilities or assistance.

There was a time when new technologies would trickle into the consumer market after they’d been developed and used by the military or in space research and exploration. But this trend is now rapidly reversing, with defense departments starting to look into ways of adapting consumer goods into their programs. A case in point is the recent call for applications by the American Defense Advanced Research Projects Agency (DARPA), an agency of the US Department of Defense. DARPA is seeking developers versed in the art of developing applications for mobile devices – or more precisely, smartphones. The agency hopes to leverage commercial smartphone development approaches to create common hardware and software that can be quickly configured to perform a variety of applications. END_OF_DOCUMENT_TOKEN_TO_BE_REPLACED